Welcome back to the penultimate installment of our Enemies of the Cross commentary!

Today we discuss the black goo.

After reading the previous installment of our commentary, you might be thinking that I just totally ripped off the X-Files by having a secret conspiracy covering up a mysterious outbreak of mutating black goo. Not so! That's actually an amazing coincidence.

The origins of the black goo predate The Coming Evil entirely and was inspired by a surprising source. 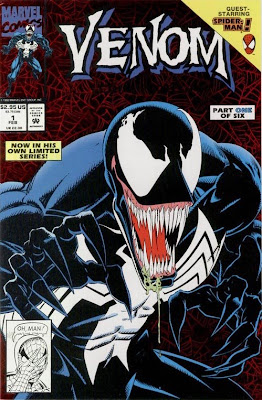 Back in the early '90s, I was big into Spider-Man comics. One character that really jumped out at me was the villain Venom. For those who haven't read a comic, Venom is actually an alien symbiotic goop-thing that bonds with some poor dolt and corrupts his mind. I remember reading a comic where Spider-Man is attached to this thing (actually, to be fair, I think it was Carnage--Venom's eviler twin or something, but it's the same idea). This sticky goop was whispering to Spidey to "Kill. Kill. KILL!"

Flash forward to that Sunday in church and the pastor's talking about "the flesh" that we struggle with, meaning our own evil desires. Our base impulses. We struggle against "The Old Man"--our old selfish ways of thinking before we come to Christ. The way he kept describing "The Flesh", it almost sounded like this separate, sentient entity. With Venom still fresh on my mind, I juxtaposed the two and considered being covered in this second skin--a flesh--that whispers in your ear to cut loose and do all the things you don't figure you're supposed to do as a "good little Christian". 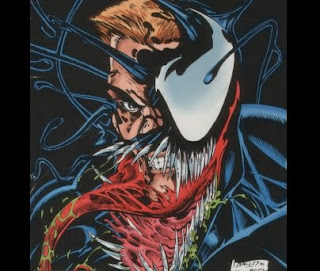 Since I was but a wee tot, the werewolf has been my favorite monster. The Incredible Hulk was my favorite hero. Both deal with the duality of man--our evil impulses and that other Voice that urges us to do good.

I really liked my Venom-as-sin concept and years later even used it as an example in teaching Sunday School classes to our Youth Group :p When The Coming Evil finally came about, I realized I wanted to introduce more types of monsters into this series--but not just traditional monsters. I wanted whole new breeds of creatures that are unique to this series. Thus, we have what happened to Ray McCormick.

The goo is simply sin in its purest form, corrupting everything, telling us to do terrible things. It's something we all struggle with. Jeff's feelings in this book are so personal to me. I have a terrible temper that I keep bottled up inside and it comes out at strange times and I'm instantly ashamed. Like Jeff, I can relate to having a beast inside, wanting to be loosed. Perhaps that's why I've always identified with the Wolf-Man and the Hulk. I understand the duality of man all too well.

In the struggle, though, I think we find some incredible stories. 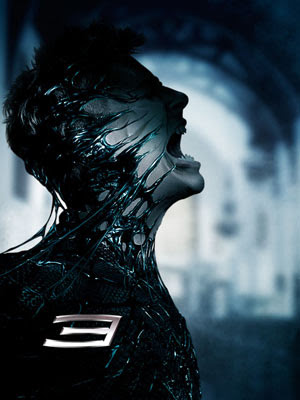 I've grown so fond of the "sin goo" concept, that it's become a factor in my larger mythology. We'll certainly deal with it some more in the concluding chapter of The Coming Evil Trilogy, but--much to my surprise--it's already crept up in one other story. I love the battle of good versus evil--and what greater battle is there than what wages in the heart of Man?

Tomorrow will be the last installment in our commentary, where we'll explore angels, fire-breathing Christians, and the power of God! In the meantime, how about checking out this great review for the book over at A Flame in the Dark!

REALLY enjoying these commentaries. The black goo did bring to mind the black oil from X-Files, but more than anything it invoked Venom. I'm a huge Spidey fan myself (well, full disclosure, I'm a comic NUT, but Spidey is my fave). Still, I didn't feel this was derivitive at all. I like how you've made sin into a tangible, solid substance. How like a sticky, black goo sin is: seeping into every pore and opening in your body, threatening to consume you completely! Of course, this makes the idea of sin being washed away by the Holy Spirit even more poignant. We're washed inside and out of such a foul, clinging slime!

I'm glad you're enjoying these. I have a lot of fun writing down my thought processes, but don't always know how interesting it is to the casual observer :p

I'm a comic book nut, myself, though I confess I gave up on super hero comics a long time ago. Everything is so status quo--there's never any real growth or lasting change :( These days, I stick to monster comics and Star Wars :p But I'll always have a soft spot in my heart for Batman...