Little bit of news today for those of you who've been waiting. Back when I announced that the third and final installment of The Coming Evil Trilogy was headed your way early '13, I made mention of a special "inbetweenquel" e-novella to be released in a few weeks. Ready for more details? Howabout we start with this outstanding cover, whipped up by occult investigator/author/buddy Bob Freeman! 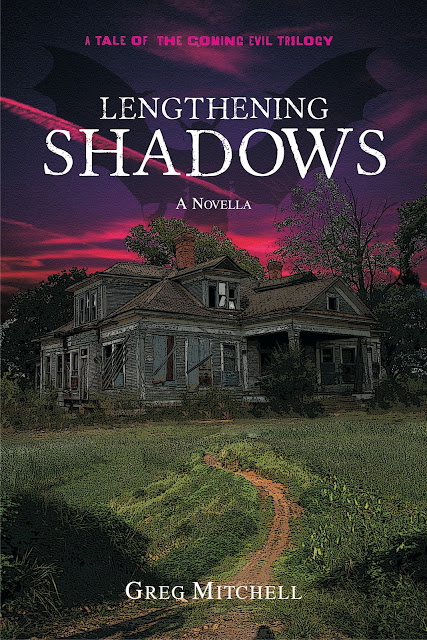 Nice, yeah? Now, here's what the book's about:


THE RESISTANCE HAS BEGUN

Rebellion is in the air as the demonic visitor known only as “The Strange Man” begins his takeover of Greensboro. Promising prosperity and hiding his true identity, the creature adopts the name “John Graves” and makes himself at home in his position as the town’s new mayor.


It is a time of sedition as former pastor Jeff Weldon and a small band of faithful warriors plot to overthrow the hellish regime. By day, they carry on in their quiet lives, but at night they venture into haunted Greensboro on dangerous missions. A war is brewing in the town’s shadows as even the remnants of the Committee—the original conspirators who helped pave the way for the Strange Man’s arrival—now plot to betray him, hiring a group of hardened mercenaries to kill the monster once and for all.

In the middle of the conflict is Annie Myers, still reeling from the grim fate that befell her older sister Rosalyn. Annie’s new and blossoming faith is put to the test as she encounters a new and fearsome monster on the outskirts of Greensboro who is taking control of the skies.

As the Dark Hour draws nigh and the shadows lengthen, it becomes all the harder to determine who is friend and who is foe, and if anyone will survive the battle to come.

Stay tuned here in the weeks to come to read more about this new novella and to purchase your own e-copy upon its release!
Posted by Greg Mitchell at 6:00 AM 1 comment: