I know what you're thinking. You got a little bit of cash for Christmas and you're thinking, "Greg, what do I do with this?" Well, I'll tell you :) Just in time for Christmas, the new superhero vs monster (in this case, robots) anthology Metahumans vs Robots from Lion's Share Press has invaded Kindle. 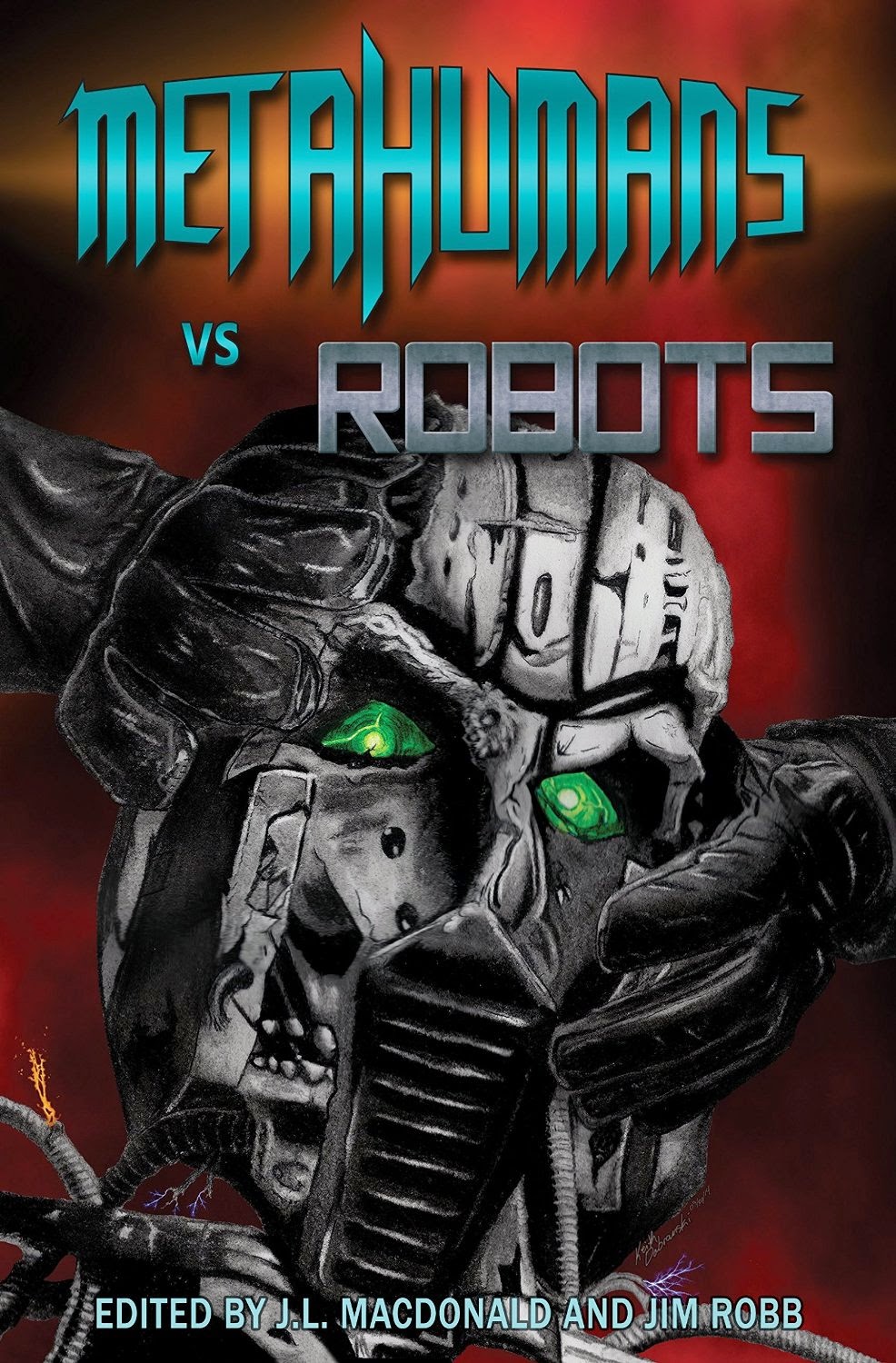 I'm excited to see this anthology hit the streets as it features my short story "A Whole Other Animal" starring my own superhero creation Light Sphere. Light Sphere played a minor role in my 2012 sci-fi actioner Rift Jump and has a cameo in the next (and final) Rift Jump adventure. And speaking of Rift Jump, only a couple days ago I wrote those blessed words "The End", signaling the end of Rift Jump, Volume 2: Sara's Song. Sure, there's editing to be done, but the book is written.

I started writing Rift Jump (and Light Sphere, for that matter) stories back in junior high/high school, and to wrap up the adventures of Michael and Sara in Sara's Song about 20 years later was bittersweet. It's a massive tome and a wild, emotional ride through the multiverse and I can't wait for you to check it out. But that's next year. In the meantime, pick up your copy of Metahumans vs Robots and follow Light Sphere on a darker, more introspective adventure. I've got at least one more Light Sphere story lined up in another monster-fightin' anthology, so stay tuned for that.

Merry Christmas and thank you for all the support throughout the years. As a parting gift, in case you missed it last week, here is the epic cover art for the upcoming Rift Jump, Volume 2: Sara's Song as done by Thomas Mason! 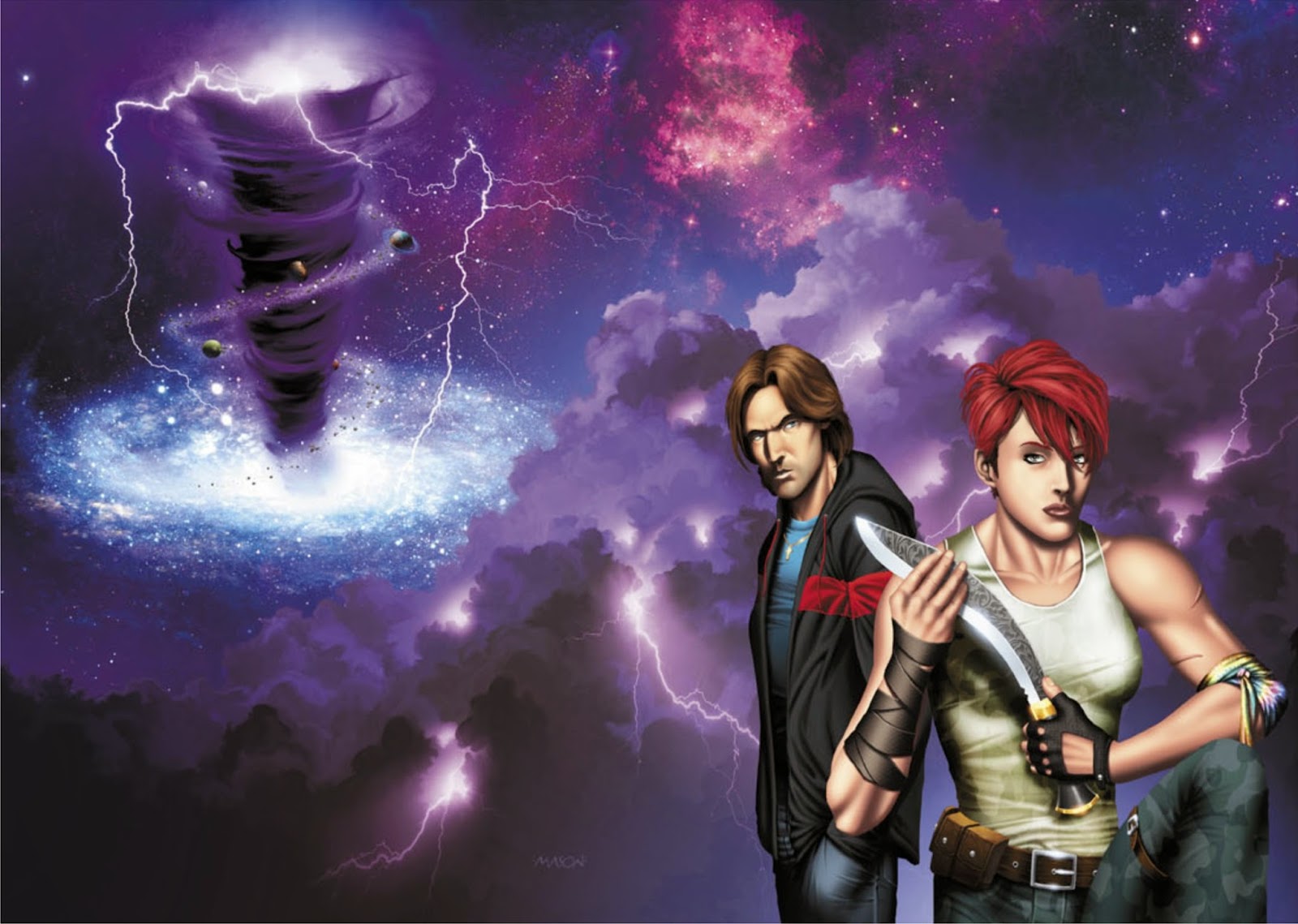 Posted by Greg Mitchell at 4:26 PM No comments:

Season's Greetings, yo! Where has the year gone?

Lookin' around the blog these days and things are lookin' pretty sparse, but fret not. Things are hopping over here. I've got a handful of short stories due out any minute now in some fantastic trades, and I've written (and, this month, gone to the set of) my second Syfy Original Movie, slated to air next summer. It has been a crazy time with deadlines, notes, and rewrites, but in the midst of it, I'm still plugging away on next year's big novel release: Rift Jump Volume 2: Sara's Song! Not ready to say too much about it yet, but, seeing as how it's Christmas and all, I'm putting on my Santa hat and bringing you this exclusive cover art for the new book, as done by comic book artist Thomas Mason! Behold!

﻿
I've been working on this bad boy for a couple years now and it's shaping up to be an insane ride through the multiverse. More monsters, heroes, aliens, and worlds-shattering events than you can shake a stick at! I'm nearing the finish line and even though I've had the major outline of this story in my head for fifteen years, it continues to surprise me. Lots of twists and turns. A lot of fun.

Rift Jump is my 2012 sci-fi/action novel, released by Splashdown Darkwater. It tells the story of lone inter-dimensional traveler Michael Morrison as he seeks to eradicate the servants of the enigmatic "Rage" that exists in the void In-Between the worlds of the multiverse. Michael's battle is two-fold as he's also been called by the Rage to lead Its army of monsters. Burdened by his dark destiny and his own sinister impulses, Michael eventually shares the weight of his quest with Sara Theresea, a fearful girl who reminds Michael of his long lost innocence--but is also a painful reminder of Michael's darkest secret. The two fall recklessly in love and set off across the multiverse, battling monsters and aliens, while also trying to overcome their own insecurities and personal demons.

Really, you should just go buy and read it, right? After all, it's available in print and Kindle!

Rift Jump Volume 2: Sara's Song is the direct follow-up, and will also conclude the series, but I'm making sure we go out with a bang. Volume 1 was, in many respects, a prologue to the Rift Jump story that I've always wanted to tell, and Volume 2 hits the ground running.

Not only does Sara's Song serve as a time-bending finale to the Rift Jump sequence, longtime readers will also start to see threads from my other stories--including The Coming Evil Trilogy and this year's big release HITMEN: Four Tales of Magick, Monsters, and Murder--coming together. In case you haven't noticed, I've got a mega-myth developing across all of my  novels (so far) and most of my shorter tales and, yes, we're all building towards something. Sara's Song is the key to unlocking a lot of those larger story elements and will lay the groundwork for the next original novel that I'm already knee-deep in as we speak.

Now that you're all excited, it's the perfect opportunity to get caught up! Books make great Christmas presents! :p

Sales pitch, aside, Merry Christmas, ever'body and, in case I don't see you before then, Happy New Year! 2015 is already shaping up to be a big year.
﻿
Posted by Greg Mitchell at 4:42 PM No comments: