I remember back in the day reading Wizard Magazine and always excited to see a feature called "Casting Call" whereby the staff at Wizard had a little fun and cast who they thought would fit best with hypothetical comic book movies.

Well, I thought I would give the same treatment to The Coming Evil Trilogy. Seeing as how this series began as a script (and one day I'd like to see it return to that format, if God so wills), I've always thought of this trilogy in movie terms. So, for fun, we're gonna sit down and cast The Coming Evil Trilogy. Some of these actors I had in mind while writing from Day One, while others I came up with just for this feature. Some of these actors have aged considerably, and some of them--sadly--are no longer with us. Therefore, this is a total dream cast, and I think that each of these actors embody the essence of the characters.

Here's the cast, broken down by each book. KEEP IN MIND, THERE WILL BE SOME SPOILERS BELOW!

Dras Weldon: From the jump, I always envisioned Ethan Embry (circa Can't Hardly Wait) as Dras Weldon. I mean, come on, look at that guy! He's got this open face and this squirrely smirk. He seems to be the absolute last person you would choose to fend off the armies of hell--which is why he's exactly perfect for Dras.

Rosalyn Myers: While Eliza Dushku's turn as Faith Lehane in Buffy the Vampire Slayer was a major inspiration for the character of Rosalyn, I went through a major Jennifer Love Hewitt phase when I first started writing The Strange Man back in the late '90s. I think she's gorgeous; her eyes are so expressive and I think she has a great sincerity and vulnerability in her performances. In the books, Rosalyn goes from girl-next-door, to tormented victim, to lost soul. I think JLH could handle all of that and make us feel for her character's dark journey every step of the way.

Jeff Weldon: My wife and I agree that a young Tim Daly would make a perfect Jeff Weldon, while my brother leans towards The Vampire Diaries' Ian Somerhalder (who might also make a pretty good Strange Man, no?). However you cut it, we need an apple pie, upstanding good man and I think Supernatural's Jensen Ackles is a perfect fit. I think the early seasons of Supernatural show that Jensen is a powerhouse of an actor. He can be cute, threatening, burdened, desperate to please his father, and kind. He's got the full range (and I hear the girls think he's hot). Well, okay, I'll admit--he is a pretty good-looking man.

Isabella Weldon: When Jennifer Lopez is not all done up in her glamorous dresses, I think she displays a real down-to-earth beauty. She exudes strength, but also warmth and humor--everything a woman needs to play Isabella.

The Strange Man: This is a hard one, and I've changed my views on who should play the titular villain. But, these days, I'm gonna throw it to Tom Huddleston. Have you seen his creepy Loki grin? I think this actor could capture the suave appeal of the demon in his human form, as well as cutting loose and being wide-eyed evil and sadistic.

Lindsey McCormick: For the Strange Man's first victim, I would select none other than Vampire Diaries sweetheart Candice Accola. She's the right mixture of bubbly innocence and beauty--and we'd all instantly hate the Strange Man for taking her out of this world.


ENEMIES OF THE CROSS 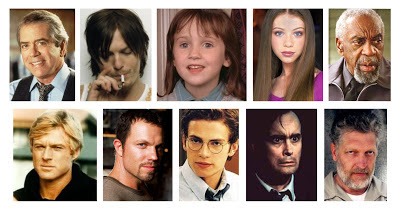 Sheriff Hank Berkley: For my money, the late great Lane Smith will always be Hank Berkley to me, hands down. He played the father in Son-in-Law (yeah, Pauly Shore!), and Perry White in Lois & Clark on ABC. I see this man and some of the characters he's played and I just want to give him a big ole hug. And that's exactly what kind of reaction I get from Hank. Hank is fatherly, a bit dopey at times, but all Southern heart. Mr. Smith would have knocked that performance out of the park.

Danny Carpenter: As stated in a previous commentary, I've always envisioned Norman Reedus as everyone's favorite rebellious punk with a heart of gold.

Millie Walker: Precocious Mara Wilson from Mrs. Doubtfire would have been perfect for the soft spoken, though courageous, toddler who dared to shove a defiant finger in the face of hell.

Leonard Fergus: Again, as already noted in one of my commentaries for Enemies, I want Bill Cobbs to play Leonard. That voice, that gait! Accept no substitute.

Christopher Perdu: Well, it has to be a young Robert Redford, right? I mean, I said as much in the book!

Deputy Ryan Stevenson: We need a hulking guy with a sinister glint in his eyes. Browncoats rejoice as I believe Firefly's Adam Baldwin would be a perfect and intimidating Deputy (and later Sheriff) Stevenson.

Will Baxter: Okay, so I chose Hayden Christensen. Attack of the Clones notwithstanding, there's something about this actor that I want to like. I believe (a younger version of him) could play the shy, untried assistant pastor--but with a darkness brewing in his eyes.

Ray McCormick: "Doom! Doom!" Marvelous character actor Jeffrey Combs has all the Lovecraftian nuance to play Lindsey's grieving father who falls victim to terrible visions of the Doom That Has Come to Greensboro.

Earl Canton: I struggled with this one, but I think I've settled on Clancy Brown in the role of Earl, playing the embittered father who distrusts his local government and wants answers for all the "mysterious events" going on in Greensboro. I've loved Clancy Brown in everything I've ever seen him in, so I'm confident he would bring an intensity, and also a great sadness, to the role of Earl. 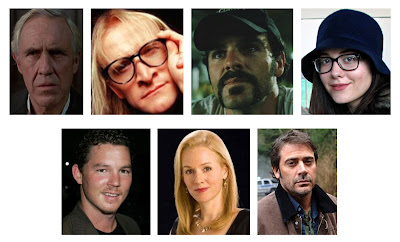 Jack Weldon: For the role of Dras and Jeff's father, I needed a man who could just look at you and either build you up or cut you down. The late Jason Robards is just that good.

Reid: When Christopher calls in for some angelic backup, he gets this long-haired hippy in a "God Is Nifty" T-Shirt. Dean Haglund as Langley in The X-Files and The Lone Gunmen was, quite obviously, the inspiration for Reid and I can't imagine another actor playing him.

Carter Ross: I pretty much just ripped off Carter's look from the character of C.J. in the remake of Dawn of the Dead anyway, so let's just cast the same actor, Michael Kelly, yeah?

Sarah Browning: This was a tough cast, but I really like Mary Elizabeth Winstead. I think she's a solid actress and would make a great "cute nerd" who makes eyes at Danny. She's smart, quirky, and confident: good qualities for the Haven's resident computer tech.

TJ Walker: Shawn Hatosy's turn as a discontent jock in '90s creature feature The Faculty puts him in the prime position for the role of misguided monster in our movie.

Rebecca Walker: Penelope Ann Miller was a name that sprung to mind while creating this list. She's got a tenderness, honesty, and fierce motherly instinct that could serve her well in the Dark Hour.

Franklin Whitaker: It's a Supernatural reunion! Papa Winchester himself, Jeffrey Dean Morgan, was always Franklin in my book. He's gruff, got the look of a hard worker, and has an easy-to-love smile.

Bonus round! I would be remiss not to include my dream casting for the Arbigast Group as featured in this e-novella that takes place between Enemies of the Cross and Dark Hour.

Jon Arbigast: I've already admitted in an earlier commentary that the character of Arbigast was directly inspired by my wide-eyed admiration of James Woods in John Carpenter's Vampires. Man, I love that guy.

Rashonda Spencer: I've never considered anyone else for the role of Arbigast's right hand woman than powerful lioness Angela Bassett.

Zabuto LeBeau: Idris Elba is everywhere these days, and there's a reason for that: He's just so blasted cool. He carries himself with humble confidence and power--perfect for Zabuto.

Nathan Callahan: Once again, the only person, in my mind, who could play the crude and brutish monster hunter is character actor Mark Boone Junior (and, hey, he's in Vampires too!).

Rachel King: Smoking hot Rachel Nichols would be a great fit as the rookie who has to prove her muster to the likes of Jon Arbigast.

So, there we go! The trilogy is cast! Do you agree or disagree with my casting? Who would you cast? Feel free to chime in and join in the fun!
Posted by Greg Mitchell at 6:00 AM 3 comments:

Whoa, This is Heavy!

I haven't made much mention of it around here, as I wanted to be further along in the process before I blew the whistle too loudly, but for the last three years (sheesh!), I've been working on writing a completely unofficial chronology for Back to the Future with the fine folks at Hasslein Books. I am very happy (and relieved) to announce that the book is finished--at least as far as my contribution goes. Now we're in the final editing phase as well as formatting and some amazing interior illustrations by the uber-talented Pat Carbajal.

Follow this link to read a brief Q&A with me about the book and look for Back in Time: The Unauthorized Back to the Future Chronology, co-written with Rich Handley, this fall!
Posted by Greg Mitchell at 6:00 AM No comments: