Trailer Debut for "Enemies of the Cross"!

And a Merry Christmas to you.

I had hoped to put together another exclusive The Coming Evil short story for your holiday entertainment, but alas, I've been super busy with a number of writing projects. However, my excitement for the upcoming Enemies of the Cross cannot be contained, so we've got a complete web redesign to reflect the February release. I had planned on changing things over to this Enemies theme after the start of the New Year, but I couldn't hold out any longer!

I also got special permission from Realms to premiere the feature trailer for Enemies of the Cross a few weeks early. You all are the first to see it! Watch it below and behold me and my acting prowess. Why am I in this trailer, you ask? Well, I played a bit part as the character of "Jeff" in the trailer for The Strange Man, having nearly forgotten that Jeff is the central character in Enemies. So, for the sake of visual consistency, I drafted myself into the role once more. I shall attempt to overcome my embarrassment and show you the trailer anyway.

Pre-order your copy of Enemies of the Cross today and look for it on shelves nationwide February 7, 2012!

Enjoy the trailer and have a great holiday!

I received a bit of an early Christmas present a couple days ago. I have signed with Grace Bridges and Splashdown Books to see my new novel Rift Jump published in 2012! Rift Jump will be part of Splashdown's Darkwater imprint, where they send all the dark, twisted things (and authors).

I've known Grace for awhile and have wanted to work with her on something. I admire her dedication, her friendliness, and her desire to put out quality work that really puts Christian Speculative Fiction on the map. She's doing great things at Splashdown, and I'm excited to be a part of it.

Splashdown is also a smaller publisher, a departure from what I'm used to with my The Coming Evil series. The reason for the switch is that, well, Rift Jump is weird. It's not easily categorized or marketed and refuses to stay in a box. It's simply just not mainstream in any way, so rather than watch it languish on a shelf trying to find its "genre", we're going to be treating this a little more "grassroots"--getting it straight to the people who want it.

So, what is Rift Jump and why should you want it?

Rift Jump is a sci-fi multi-dimensional love story with monsters, loads of action, teen romance, and a dash of metaphysical philosophizing to boot. It's a single novel split into five episodes or "parts". We meet 12-year-old Michael Morrison, an orphan living on the streets, surviving in a life of crime with his brothers. He dies in a hail of bullets and then his journey begins as he discovers the multiverse and will learn of a hungry evil that lurks in the dark space In Between the worlds that is seeking to sow Chaos. Michael is chosen by the Light--represented as a mysterious man in a duster and Stetson--to combat this evil. What Michael will discover, however, is that the Dark wants to use him as an instrument of evil. Michael feels the Dark's call on his life and worries he'll never be able to escape, no matter how long he serves the Light. His burdens are shared by Sara Theresea, a timid girl who thinks little of herself. In Michael she finds boldness--in Sara he finds the key to his redemption. Together the two fall almost instantly in love, desperate to cling to something in their lives. While they're convinced that their love is everlasting--as most 17-year-olds are--the reality of their life as "rift jumpers" and the ever increasing threat of the Dark claiming Michael's soul once and for all, will put their love to the ultimate test.

I first had the idea for Rift Jump in high school and turned in a much rougher version for a Creative Writing assignment. I remember it as the first "real" story that I was ever passionate about. While it's a story about teenagers--and all their angst-ridden love affairs--this is not a YA book.

Over the years, I wrote many Rift Jump stories--never with the intention of actually sharing them with anyone. They were a sort of training ground where I experimented with style and tried to get a feel for this whole "writing thing". In fact, here's a photo I took of all my old Rift Jump stories (with covers done up by me :p). 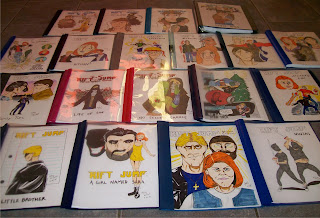 The stories were mostly cheesy and awkward, really, but after many years, as I grew into my own as a writer, I started to realize that there was actually a really neat idea piled underneath all those layers of amateurish scribbling. After The Strange Man was published, I decided to dust off those old Rift Jump stories and started to rewrite them extensively. I'm very pleased with the results, but still feeling a little vertigo about it all. It's very odd to me that I'm actually talking about Rift Jump in public and that people will actually be reading it :p

There's a more personal story behind Rift Jump's creation, which I'll share at another time. For now, I just wanted to introduce you all to the story that's been lurking in my desk drawer since I was 15 years old.

Look for Rift Jump in Summer 2012 from Darkwater!
Posted by Greg Mitchell at 6:00 AM 3 comments: