It's been forever since I've posted on here, mostly because I've been hard at work on a number of upcoming projects. Not only that, but I've been, frankly, trying to live my life a little. It's possible to have too much going on, and I was knee deep in that territory for the latter half of last year. So this year, I'm taking a bit of break. Still working, but these days I'm working more on my personal projects rather than "for hire" work--though there's some of that thrown in there, too.

So what's coming up?

First off, I'm pleased to announce that I have finished the manuscript to my seventh novel. Still have edits to do and then there's the question of what to do with it after. I've published my last three books on my own, without much success, to be honest. But I love the creative control and the freedom. Plus, with publishers becoming even more exclusive because of the increasing financial risk of publishing anyone who is not Stephen King or George RR Martin, I'm not sure where to turn. But that's all upsetting business stuff to worry about later. Right now, I'm focusing on just the simple joy of telling (and completing) a story. I don't want to say too much about it just yet, but what can I tell you about the next book? No title yet, as it keeps changing, but this is a story that I've been trying to tell--in one form or another--since 1998. In many ways, it's a return to my Coming Evil roots--simple people fighting off incomprehensible evil. It involves a City that devours souls, and centers on Quinn, a thuggish "Retriever" who makes sure that, well, let's just say he makes sure that the dinner doesn't scramble off the plate. It's a noir-type story, rife with monsters and a very faith-driven fight of good versus evil. Also, it fits squarely into my larger mythology. In fact, this book is the concluding chapter of my current "concept trilogy" that consists of HITMEN: Four Tales of Magick, Monsters, and Murder, and the Rift Jump duology. Together, they pull back the veil on the world introduced in The Coming Evil Trilogy, showing that the threat presented by the Strange Man has its roots in something much more cosmic. And that tasty morsel leads into my next announcement...

I've officially broken ground on the next Coming Evil novel. Still waaaay too early to say anything about that yet, but I've had this story in mind for many, many years. There are seeds of it sprinkled throughout The Coming Evil, and even more of its foundation is laid in the aforementioned "concept trilogy". I'm super excited about it, but nervous, as well. The Coming Evil has always been very special to me and I want to be extra careful to handle its continuation properly.

In other news, I've also had the opportunity to help develop another Syfy Channel Original. I'm buried way back behind the scenes on this one, but it's always fun to be involved in these creature features. Definitely can't talk about that one yet, but I'll be sure to keep you posted as the premier draws nigh. 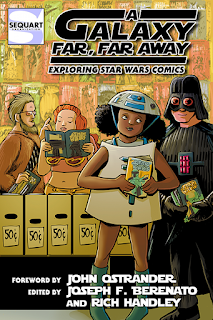 Finally, my fellow Star Wars contributor Edward M. Erdelac and I have co-written an essay on that beloved saga to be included in Sequart's upcoming book A Galaxy Far, Far Away: Exploring Star Wars Comics. Very thankful to be included in this alongside other reputable Star Wars fans and authors. I think it's going to be pretty neat. Look for that later this year.

That's what I've been up to. I know I started this blog with saying that I wanted to be less busy, but, believe me--this is less busy for me :)

And, no, this won't be the last you hear from me for another six months. Coming up in the days ahead, I've got an interview with my buddy, paranormal investigator and author Bob Freeman. He's got a new book out!
Posted by Greg Mitchell at 5:00 AM No comments: