Hey, everybody. Me, again, with another cool announcement. I've just been accepted into another awesome anthology also slated for a Halloween release! You can read about the first announcement right over here.

This new anthology is called MONSTERS! and is coming atcha from Diminished Media Group, the folks behind the sweet website A Flame in the Dark that discusses one of my favorite topics--the twilight zone where fear and faith meet. They've also reviewed the first two books in The Coming Evil Trilogy (read 'em here and here)! 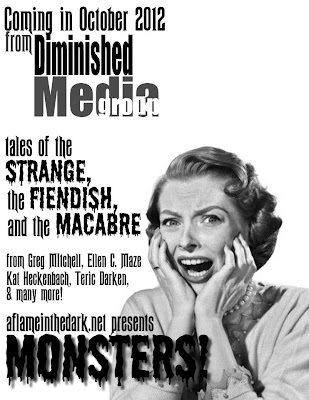 I'm very excited to be a part of this project as it's clearly done by a group of people who "get it". They have a love for the classic monsters and I couldn't find myself in better company. My contribution to this terror festival is "Divide and Conquer". Ironically, enough it's another Vinnie Caponi story--the star of my other Halloween anthology story! Having two Vinnie stories coming out in the same year, in the same season, is an unexpected treat, but that just gives you more incentive to buy both anthologies, yeah? :) My story featured in A Cat of Nine Tales will chronicle Vinnie's "origin" as an urban mythologist, while my piece in Monsters! will give you a rip-roaring ride loaded with monsters, some old-school vampire hunting tricks, and a band of surly rough-and-tumble devil smashers. It's a lot of fun and I'm stoked that you guys get to see them both.

Check them out, this Halloween!
Posted by Greg Mitchell at 8:25 PM 2 comments:

I was pleased to get the notification this morning that my short story "Metamorphosis" had been selected as part of the offerings for Rookhaven Publishing's forthcoming "A Cat of Nine Tales" anthology of occult detective stories. Taking one look at the table of contents, though, left me quite stunned. 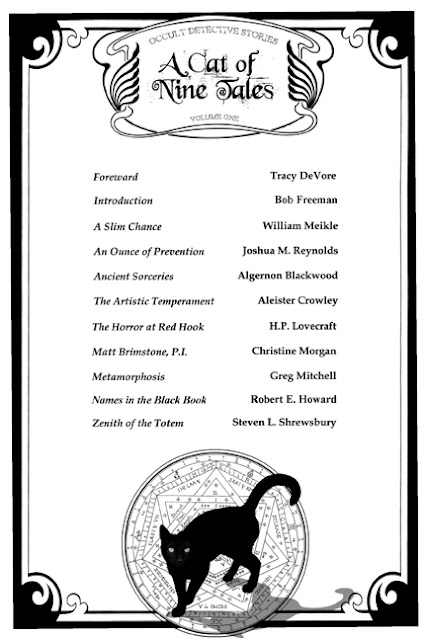 Wait, I'm sorry. Blackwood? Howard? Lovecraft? And...Mitchell? You'll have to forgive me for totally geeking out. Sharing page space with such an impressive and inspiring group of occult writers is a thrill and certainly one I never expected. So what can you expect from my contribution to this spooky new collection? "Metamorphosis" is the world's introduction to my own occult detective hero--the self-labeled "Urban Mythologist" Vinnie Caponi. I've had Vinnie kicking around in my head since the early '00s and I have some pretty big plans for him in my uber-mythology. But here, in A Cat of Nine Tales, you will get a peek into his humble beginnings. I'm thrilled to be a part of this project and I hope everyone checks it out when it releases...this Halloween!
Posted by Greg Mitchell at 12:16 PM 1 comment: