The Road to Revan

Super exciting news today, guys. The cat is out of the bag, I'm going to be a contributing writer on Star Wars: Revan: Rogue Jedi! 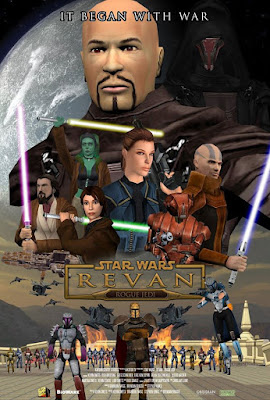 You may ask "What is that, and why should I be excited?"

Allow me to explain:

Back in 2003, Bioware developed a Star Wars video game called Knights of the Old Republic. It's set some four thousand years before a simple farm boy from Tatooine blew up the Death Star. The game was a role-playing action adventure designed to put you in the center of the story. You're able to customize your character's appearance, give them a name of your choosing, and it also allowed you to dictate how you responded to any number of situations. YOU are the star of the game and your fate is in your own hands. It was a massive hit spawning sequels, comics, novels, and introduced the much-beloved character of Revan to the Star Wars canon (well, before Disney obliterated all that...but that's a topic best saved for another time...).

Over the years, intrepid fans of the original Knights of the Old Republic game (abbreviated to KOTOR) figured out how to crack into the game's programming and further customize it, crafting new characters and new landscapes--all still using the game's engine.

That's where Kevin Smets comes in. Kevin's a professional video editor and filmmaker--and also a huge fan of KOTOR. A number of years ago, he began "filming" a series of movies based on the game. Meaning, he recorded his playthrough, dubbed in his own voice as the main character's--that he named Logan Starr--added new music, and customized it to the point that it tells the story Kevin was interested in telling, sometimes veering away from the game's storyline. I saw his movies and I was totally smitten by the creativity and ingenuity that he utilized in putting together this "fan film".

But then! Then I heard that he had partnered with some phenomenally talented computer whiz kids to create BRAND NEW movies based on Logan Starr's backstory. Things never seen in the original game--or any game. This is all new content, built from scratch, using the original game's engine. It looks like KOTOR, it "feels" like KOTOR, but this is no game. It's pretty incredible that they were able to do this. And this movie? It is called Star Wars: Revan: Rogue Jedi.

This is the first part of a trilogy of new films, chronicling the backstory of Kevin's character Logan Starr. It will have all-new storylines, characters, locations, voice actors, new sound design, effects, etc. I  have no doubt it will be a sight to see when it is finished. I have been in talks with Kevin for a while now, and he knows of my love for Star Wars and his particular take on KOTOR (as well as my writing background), and he has graciously invited me to come on board his team and help bring the Revan Trilogy to your computer screen. Kevin is handling the lion's share of the writing chores, as this is his baby, but he's also a busy guy and has recognized he can't do it all on his own. I'm more than happy to help shoulder the burden, because I believe in the project that much.

While this is totally unofficial, it's still an opportunity to write Star Wars, a dream of mine for so long now. I am grateful for the chance and can't wait for you guys to see the final product. In the meantime, you've got plenty of time to get caught up on the other Logan Starr movies. There are a total of seven so far. The first trilogy centers on Logan Starr, while the second quartet focuses on Logan's friend and apprentice, Meetra Surik. Her journey is chronicled in the movies of YouTube user Darth Ycey.

Hit this link to check out the first Logan Starr adventure, and tune in here for future updates as they come in!
Posted by Greg Mitchell at 3:05 PM No comments:

First, allow me the annual dusting-off of cobwebs on this here blog...

Now with the housework out of the way--Welcome! The leaves are changing, the wind is turning crisper, and my favorite season is upon us. Halloween is here, and I have returned to the interwebs with a treat to offer you.

Over the course of the last year and a half--among the other projects I've been tinkering on--my friend and fellow author Bob Freeman and I have been putting together our first storytelling collaboration. As you may or may not recall, Bob has already lent his incredible artistic talents to my HITMEN novel, providing the cover. But, this time, we agreed to tackle a novella together, trading off writing chores on rotating chapters, and making it a point to surprise the other. It was a lot of fun and, today, we present to you the fruits of our labors...Hallowe'en House! 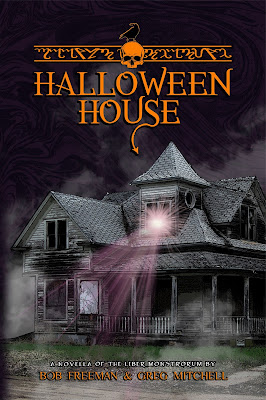 This tale was especially thrilling for me as it involves the character Bob named after me, and it also marks the first time I've ever written in Bob's sprawling occult detective mythology. I've been a huge fan of his mega-myth for a number of years now, but actually contributing to it filled me with equal parts eagerness and caution. I think we've crafted a wile ride through the darkest corners of the cosmos and we hope you agree.

Also of note, readers of my own mythology (particularly my Rift Jump duology) might find some interesting connections inside the Hallowe'en House...

The book is available now in print and Kindle. Get your copy today--just in time for Halloween! A perfect little story to read by the soft flicker of Jack O'Lantern light.

Demonologist Greg Mitchell has discovered a secret from his father's past, a secret that not only sheds light on their strained relationship but on the path he has found himself upon, caught between Heaven, Hell, and all points between.

But they're not the only ones who have come seeking out Hallowe'en House. 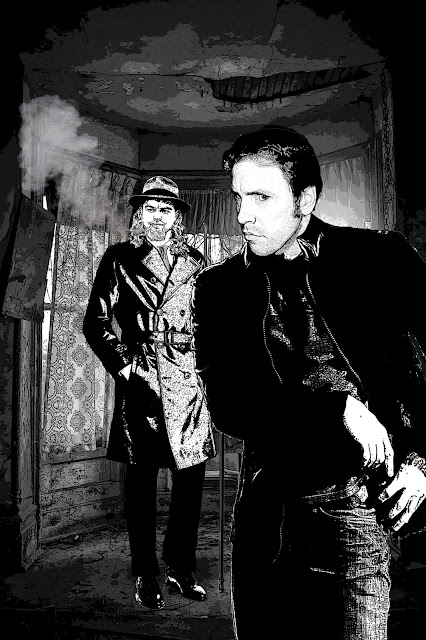