It's that time again. Summer is upon us and, with summer, comes a bevy of new sharksploitation movies for Syfy's annual Sharknado Week. Last year I was fortunate enough to contribute Zombie Shark, writing its screenplay. But this year, there's a new finned menace in the waters. I present to you... 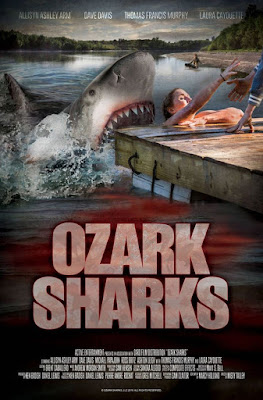 This was a fun one that I had the opportunity be involved with in the early stages of pre-production. I helped develop the project, writing its first draft and later serving as Associate Producer. Marcy Holland came in and did a super job making the script her own, but still very much honoring what I originally put in there, and I am forever grateful to her for that. She rocks. As with Zombie Shark, this one is directed by Misty Talley--the first woman director of one of these Syfy Channel Original Movies we're told! Pretty awesome. She does a killer job (no pun intended) and the cast is great, bringing together some of my favorites from my previous two scripted Syfy outings (Snakehead Swamp and Zombie Shark), as well as some talented fresh blood.

I hope you check it out when Ozark Sharks hits on the Syfy Channel, Thursday, July 28 at 8PM Central.

What else is going on? So glad you asked. I'm doing my final edits on my next novel, and hope to release it very, very soon. It's coming along and I'm anxious to see what you guys think of it. In the meantime, behold the cover!

Expect a full reveal/synopsis in the weeks ahead, but Infernal City tells the story of a City that, quite literally, eats souls! This one has been in the works for awhile now and it's very much a return to the themes and "flavor" of my The Coming Evil Trilogy, that no fan will want to be without. I liken the new book as a first cousin to The Coming Evil, so keep checking back here as we get closer to its anticipated (at least by me) release.

In the meantime, Ozark Sharks!
Posted by Greg Mitchell at 5:48 PM No comments: