"The Coming Evil, Book One" Gets A Release Date!

Just got word from my publisher that the tentative release date of "The Coming Evil, Book One: The Strange Man" will be January 4th, 2011. A long ways away, but I'm determined to make it worth the wait.

Mark your calendars!
Posted by Greg Mitchell at 5:27 PM 2 comments:

Following yesterday's announcement, Paige Lehnert at Xulon Press interviewed me and wrote up a nice little article about my move from self-publishing to Realms Fiction. Check it out!

It's Official: "The Coming Evil" coming soon from Realms Fiction

I told you I had big news.

It's been many months in the making, but I'm proud to finally announce that, yes, "The Coming Evil" has a new home and it is Realms Fiction! Realms is an imprint of Strang Communications and, I'd say, specializes in Christian "supernatural thrillers", so I think that "The Coming Evil" will be a great fit. We're still early in the process, so I can't even begin to guess when the book will be hitting shelves (that's right: hitting shelves!), but I will be sure to keep you posted.

As I've stated before, this will be the "Expanded Edition" of the novel--it's longer, introduces some characters you'll be seeing more of throughout the remainder of the trilogy, and will have the added bonus of having a professional editor go through and improve the writing :p If you own a Xulon Edition already, then consider yourselves one of the "lucky few". The book is now out-of-print and there are only a limited supply left in circulation.

I've already had some who purchased the original Xulon Edition of the book express their worry that their version is now "obsolete". I have tried very hard to include things in the new edition without fundamentally changing it. That is to say, that, if you already own a Xulon Edition of Book One and want to jump right into the Realms Edition of Book Two when it comes out, no, you won't be horribly lost. Everything plays out the same, there's just more. More monsters, more Dras being goofy, more Jeff and Isabella, and a much bigger role for Jack Weldon. I hope that Xulon Edition-holders will go out and buy one of the new editions when it's available. I think you'll be really pleased with the additions.

Well. There it is. My big announcement. It has been over a decade in getting to this point and I know that the work's not over yet. But, I wanted to take a moment and thank everyone who's supported "The Coming Evil" over the years. I also have to stop and give credit to God. In my heart, I always knew that "The Coming Evil" would see the light of day, but in my head I often lost hope. But I stayed the course and held the faith and God, in His good timing, seems to have finally brought those monster-filled dreams to reality.

Posted by Greg Mitchell at 2:46 PM No comments:

I just read "The Muse" by Fred Warren!

Wow, it's been awhile since I've posted.

I have been super busy on "The Coming Evil"-related things (among other writing projects) for the past few months. In fact, I have some pretty big news forthcoming, but am not ready to make the announcement just yet. In the meantime, I've been catching up on my reading and have just finished fellow Lost Genre Guild member, Fred Warren's, novel "The Muse". 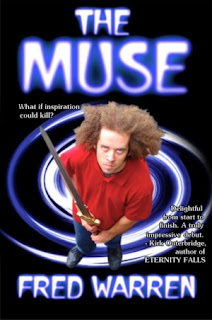 "The Muse" (published by Splashdown Books) is the tale of a struggling fantasy writer named Stan. He's got his writer group friends--a sci-fi technophile named Davos and a paranormal romance vamp-fan named Jilly. The three meet at their local coffee shop/bookstore and discuss the all-too-familiar woes of trying to break into the market. It seems that their luck has finally turned for the better when a new face shows up to their meetings--the mousy Leila. Leila gives them the inspiration they need to get past their writer's block and begin to make waves in the publishing world, but not without a price: Their eternal soul! (or, you know, something like that)

This book was a lot of fun. It was deftly written, with a solid voice and grasp of language. It was descriptive without getting bogged down in endless detail, and it moved at a pretty good clip. It was pretty easy to read, really. I'm naturally a slow reader (a bad trait for a writer, I suppose), but I found myself cutting through 60 pages of "The Muse" in my initial sit down, without realizing the time.

While it does sport a good twist or two, the plot isn't terribly original, I'll grant you. It's a very traditional story with all the beats you'd come to expect, but I think that, to some audiences that could prove to be its advantage. I'm not sure if this was the intent or not, but I think this novel would make a great Young Adult read. With its simple lessons of bravery, friendship, trust, and the value of taking the hard-earned road over the "easy way", I think this is a great book for a family to share. The characters are very innocent and uncomplicated. This is kind of a two-sided coin as, while their honesty and integrity is refreshing, the fact that they genuinely use words such as "fiddlesticks" and "fooy" as a curse, I suppose it could either come off as pleasantly quirky or groan-inducing cheesy. But, the characters are certainly likable and easy to relate to and, even though I had a pretty good idea how everything was going to play out (and I was right), I still cared enough about the characters that I wanted to take that journey with them, nonetheless. There were a couple points in the book where I felt that Mr. Warren could have delved deeper into some darker, more complex emotions--but that's really not this book. It really reads like an "all ages" PG family movie--something bright and life affirming and fun.

The only thing I'd complain about the book is that, once the action started rolling, it was over! The characters seem to take a long time to realize that "mousy" Leila is actually "I will swallow your soul" Leila--with a lot of talking things out amongst themselves that are painfully obvious to the reader. But, once they're all on board with the "fighting evil" spirit that I love so much, it moves by too fast. I would have liked to have seen more of the "epic battle of good and evil" that makes up the last third of the book. Many characters were introduced towards the end that were interesting in their own right, and I felt as though I'd missed out on meeting them earlier. I'm the first to admit that I am NOT a fantasy fan. I like my werewolves and my monster hunters and my Great Old Ones. But this is the kind of fantasy I like--Tolkien with a modern day twist--with a unique way of taking the mundane and catapulting it into the fantastic. All in all, I found myself entertained and definitely think that this book will resonate with all those underground speculative fiction writers out there struggling to get their voice heard.

Be sure to check out Fred's site over at http://frederation.wordpress.com/!

Posted by Greg Mitchell at 6:42 PM No comments: