Look! Up In the Sky! 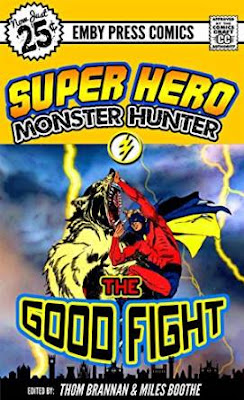 I'm pleased to announce today that the MONSTER anthology (seriously, this thing is gargantuan) Superhero Monster Hunter: The Good Fight is now live on Amazon from the fine folks at Emby Press! Right now, you can feast your eyes on the digital copy, with a hard copy soon on the horizon.


My short story "Red Fog" is included in this mammoth text, featuring my own superhero creation Light Sphere. I've spoken about Light Sphere and his creation before on this very blog, but I created the character way back in junior high in the early '90s when the X-Men were really cooking. Seriously, the comics were back in vogue and there was the new FOX cartoon (which totally blew my mind). "Mutants" were all the rage and I jumped in with my own variation on the concept, but I wanted something with a bit of a twist. In Light Sphere, I created a character whose greatest strength was his greatest weakness--he had the ability to blast energy from his hands, but to do so without wearing these special mechanized gauntlets, he'd fry his arms to crispy husks. It's a severe limitation and, I thought, would make for an interesting predicament. Or, at least I did when I was thirteen. 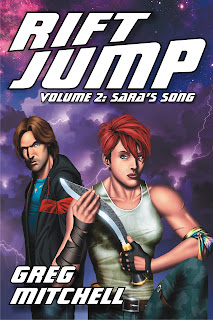 I wrote and drew (re: traced) two whole issues of Light Sphere back in ninth grade or so, in the back of my classrooms while I was supposed to be learning something. Then, after that, Light Sphere got stuffed in a shelf and forgotten until about 2012 when I resurrected him, gave him a fresh polish, and included him in my multidimensional cosmic horror romp Rift Jump. He showed up to duke it out with my main protagonist in that book (another comic book character I created later in high school--Michael Morrison) and, like any good superhero yarn, the two slugged it out before becoming friends and allies.

Since then, I've had fun crafting new stories for Light Sphere. Late last year he tangled with a very strange lycanthrope in Lion's Share Press' anthology Metahumans vs Robots. Most recently, Light Sphere made a return in my brand new novel Rift Jump II: Sara's Song!

Needless to say, the guy's making the rounds and it's been a real blast playing with this character after so long and telling his stories after all these years. As for "Red Fog" in particular, it is my homage to the classic Batman/Dracula series of graphic novels: Red Rain, Bloodstorm, and Crimson Mist. Those things were a revelation to me when I was a teenager, combining Gothic horror and the noble plight of the superhero. I hope I've done that style of story justice, as well as adding my own spin on the material.

Check out Light Sphere battling vampire hordes in "Red Fog" collected in the pages of Superhero Monster Hunter: The Good Fight! And now I leave you with this:

The wait is over.

Available today is my new release Rift Jump, Volume Two: Sara's Song--the concluding chapter of the Rift Jump duology! As always, the book is available in print, Kindle, and other ebook formats.

Folks, this has been a crazy ride. I knew when I wrote the original Rift Jump that I had one more book in me to wrap up Michael and Sara's trip across the multiverse, but Sara's Song has really surprised me. For starters, this is the longest thing I've ever written, and it is jam-packed with adventure, heartache, cosmic horrors, and explosive action--and the stakes have never been higher. All of existence is in danger of being eradicated, and our two favorite dysfunctional teenage runaways are at the very heart of it.

What was perhaps most surprising to me is that this book also lays the groundwork for the entire uber-mythology that encompasses most of my work, including The Coming Evil Trilogy. Trust me, you'll never look at the little town of Greensboro the same after reading this! It's all setting up for where I would like to take The Coming Evil series in future books.

So enough of the sales pitch. Go out and pick up your copy today. Here's the cover and synopsis. And, if you're behind on this series that spans space and time, you can also buy the recent Rift Jump: Revised and Expanded Edition and experience the journey from the beginning. 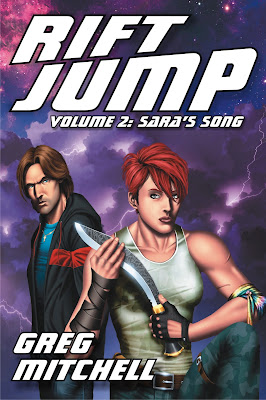 For over a year, Sara Morrison has been living a life she never dreamed possible. Rift jumping across parallel dimensions with her husband Michael, who is on a quest to battle the Rage, and their adopted son Toby, who possesses superpowers of his own, Sara has experienced wonders beyond belief. But she can't help but feel inferior to Michael as he saves the day time and again, and Sara longs for the chance to shin on her own.

When Michael and Sara encounter a cosmic storm that is shattering the worlds within the multiverse, Sara begins to uncover devastating truths about her past, her foretold future, and her connection to the reality-devouring storm. In order to overcome her own frightful fate, Sara will have to make a harrowing journey across the worlds and into the very heart of hell itself, before the multiverse falls to total darkness and her family is lost forever.
Posted by Greg Mitchell at 6:00 AM No comments:

An Update and a Release!

Been awhile since we've had an update around here because I've been knee-deep in the final phases of production for my new novel Rift Jump Volume 2: Sara's Song. I'm happy to report that we're almost there! The e-book will most likely be online this week, with the paperback soon to follow--if not released simultaneously. Ironing out all the kinks and getting it ready to unleash upon the world.

Sara's Song is meant to be the capper to my wild little ride through the multiverse and, believe me when I say, this is the biggest project I've ever done. There's some mind-bending, reality-warping, galaxy-shattering goodness going on in this thing. Think Lovecraft meets Star Wars with teen love thrown in the mix, all wrapped in a comic book package. This is a fantasy epic I've been working on since high school and I'm excited to share it with you all.

In the meantime, now is the perfect time to get caught up on the Rift Jump saga. The Revised and Expanded Edition is now available in print and e-book. Check it out and stay tuned for the big release of the epic finale! 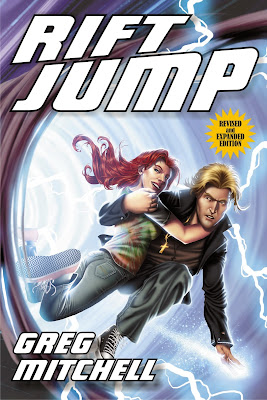 Posted by Greg Mitchell at 8:11 AM No comments: