Welcome to the final installment of an all-new Rift Jump short story, exclusive to this site. In "Company Man", we explore the origins of the villainous Hooded Man from the original Rift Jump novel--now on sale in the new Revised and Expanded Edition. 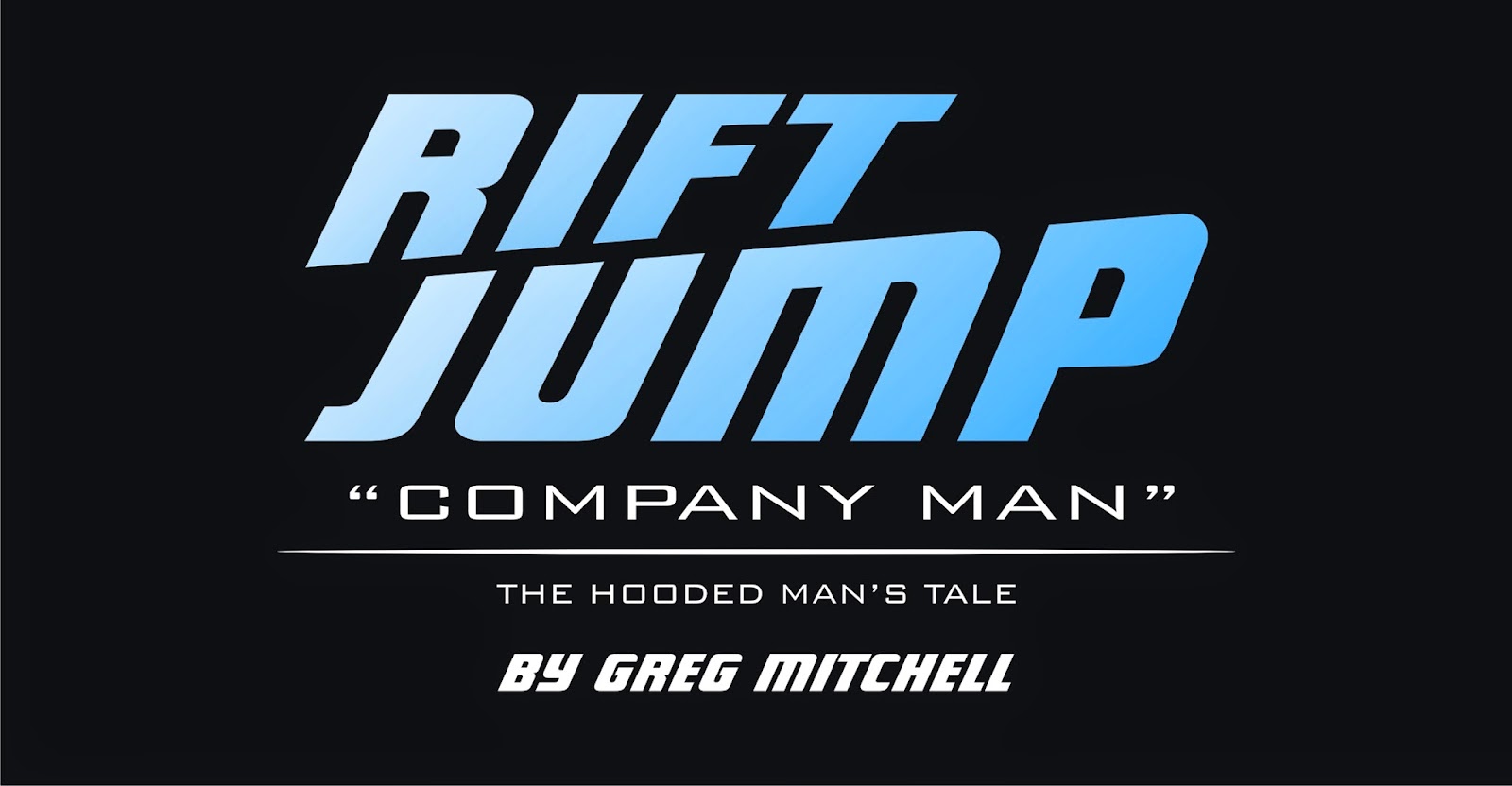 The Hooded Man arranged Sara’s body on their bed and softly kissed her forehead.
Then he set the house on fire.
He stood now, wrapped in his tattered coat and hood, watching the last remnants of his independence burn away. It’d been a good life, the last fifteen years. A good distraction, but a distraction all the same. Rip had tried to tell him that he was meant for more, but he’d refused. Resistance was useless. He understood that now, here at the end, and he would teach it to this other Michael Morrison.
You can’t run from who you are.
He was a company man, through and through.
“Are you ready to leave?” the voice spoke from the shadows behind him.
He nodded, not facing the Maestro. “I’m ready.”
“Then let us begin the concerto.”

To Be Continued In
RIFT JUMP: Revised and Expanded Edition
Now on sale from Genre Experience

Thanks for reading, everyone. Go out and get your copy of Rift Jump: Revised and Expanded Edition, and stay tuned for the release of this summer's stunning sequel--Sara's Song! 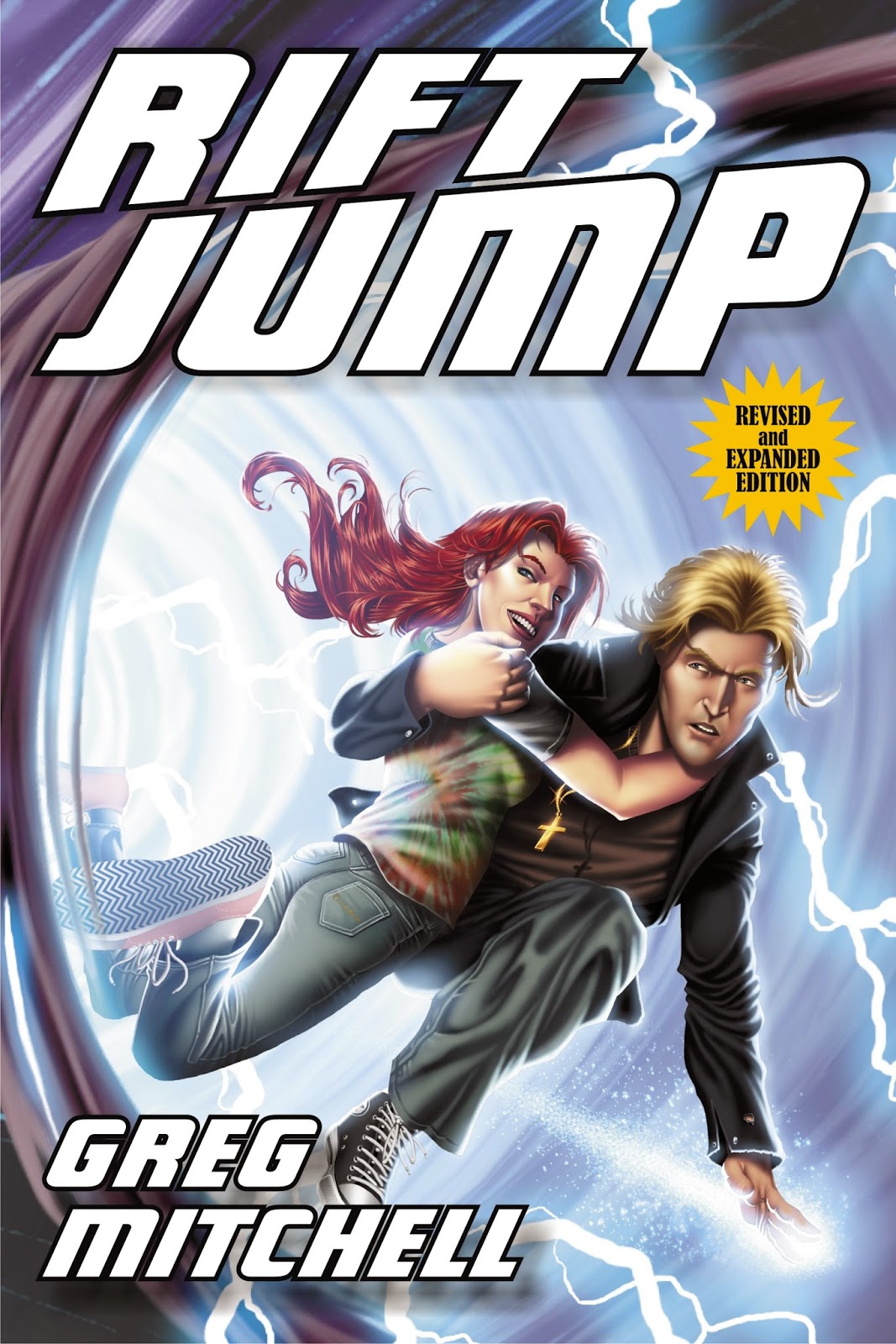 Posted by Greg Mitchell at 7:27 AM No comments:

Welcome to the fourth installment of an all-new Rift Jump short story, exclusive to this site. In "Company Man", we explore the origins of the villainous Hooded Man from the original Rift Jump novel--now on sale in the new Revised and Expanded Edition.


Michael and Sara raced down the hall, pushing workers out of the way. More robots joined in the pursuit, their metal feet clanking on the floor as they gave chase, all the while shouting their commands to halt. Even some of Michael’s co-workers hollered after him, telling him to give up, to give in, to blend in. One man even reached out, anger marring his features.
“What do you think you’re doing?” the man snapped. “Have you lost your mind?”
Scowling, he wrapped strong arms around Michael, to pin him in place, but Michael jerked wildly, slipping from the grip. In one fluid move he curled his fingers into a fist and punched. He’d never hit a man before, and was struck by how painful it was. Nevertheless, it did the trick. Surprised, the co-worker sprawled to the ground, his nose busted.
Michael stood over him, then regarded his shaking hand, exhilaration pumping through his veins. He laughed, elated, until Sara tugged on his arm, grinning as well. “Hurry!”
They did. Michael saw a side door up ahead that would take them down the fire escape to the floors below, but as they were about to reach it, anther monitor emerged. It pointed at Michael, its feminine voice deeper and agitated, “STOP!”
Michael and Sara slid to a halt as the robots closed in, blocking off every avenue of escape. Sara clung to him, trembling, and Michael worried what their fate would be. At the very least, they would be forever separated from each other, re-stationed in two cities on opposite ends of the country.
But the likeliest outcome was that they both would be liquidated for their rebellion.
“I’m sorry, Sara,” he shouted over the increasingly loud commands to get on the ground and submit.
“Don’t be,” she said, looking into his eyes. “For a moment, we were free. Truly free.”
He smiled and realized that, if these were his last moments on Earth, there was only one thing left to do.
He leaned down and kissed her. She cupped the back of his hair, pulling him closer, melting into him. Michael wrapped his arms around her, determined to never let her go.
A loud crash shattered their kiss. Michael parted from Sara and turned to the glass wall at the far end of the hallway, looking out over the city. Presently, a hovercar sat parked in the hallway, broken glass littering the carpet, and one robot pinned underneath the heavy vehicle. In the cockpit—
“Rip!”
Rip undid the hatch on the vehicle and stood, crowing. “C’mon, little brother, get a move on, will ya!”
Michael laughed out loud, clutched Sara, and made a run for the hovercar. Monitors reached out for him, their cold metal fingers clamping the air around him, missing him by inches.
A phalanx of androids swarmed them, but Michael helped Sara into the cockpit as carefully as he could. One droid secured his arm and Michael kicked at it, roaring in rage and adrenaline. He wouldn’t go back! He would be free!
He stamped with his foot until the robot let go, its neck spurting sparks where Michael had broken it. He scrambled into the hovercar as Rip pulled away. One of the droids leapt through the broken window, sailing through the air and landing squarely on the hovercar’s hood.
Rip floored the engine—somehow he must have rewired the controls and shut off the automatic pilot—and swerved, trying to dislodge their unwanted occupant. “Thing won’t budge!” Rip grunted, jerking the yoke, but unable to lose the mechanical parasite. “You’re gonna have to go out there, dude!”
Michael gulped and looked to Rip. “What?”
“Go on! You were born for this!” Rip guffawed, then reached up and jettisoned the canopy lid. Hard winds pummeled them and Sara screamed, strapping herself in, clinging to Rip’s tattooed arm as he drove. His long, braided hair whipped in the gusts, and he just howled in laughter.
Michael felt like he would vomit, but steeled himself. Ahead, the robot’s fingers punched holes in the hood as the thing pulled itself up slowly. Straining, the mechanical beast reached out with a clawed hand, relentless in its pursuit.
“Scribbler Morrison, Michael A,” the woman’s voice remained calm, even as the robot struggled to hold its grip. “Return to your designated station immediately. Failure to comply will result in your liquidation.”
“Michael!” Sara squealed.
Michael grit his teeth and wobbled to a stand in the cockpit, slammed by winds. “I’m done taking orders!” he roared, the ferocious gale stealing his words, but not his passion. Letting loose a roar, he dove forward onto the speeding car, grappling with the robot. The monitor used its free hand to swat at Michael, and he took a hard slap to the face, but he would not let go.
He rose up on the monster, yanking at it, trying to dislodge it, to save Sara. A wild, uncontrollable rage coiled in his gut, swelling to consume every nerve. It powered his fingers as he tightened his hold on the robot’s neck. Wires popped loose, sparks shot out, and Michael grimaced, snarling now. “Die!” he spat, cold inside. So wonderfully cold and numb to pain and fear and worry and doubt.
Rip was right. He was a killer. An animal, caged for far too long.
He savagely ripped the monitor’s head off and heaved it over the side of the car. Sparks spurted from the neck stump, and the robot’s body twitched, loosened its fingers, and slid off the hovercar like so much useless junk.
Michael held onto the car as it sped on, breathing heavy, but cooling. He faced Rip who offered him a hearty thumbs-up. “Always knew you had it in you, Mike!”
Michael sneered, feeling powerful—indomitable. Godlike.
Then he saw Sara watching him, apprehensive. His rakish grin softened and faded to a frown.

Tune in on Monday, March 16 for the conclusion to the Hooded Man's tale!
Posted by Greg Mitchell at 6:00 AM No comments: