"Red Fog" to Appear in "The Good Fight" 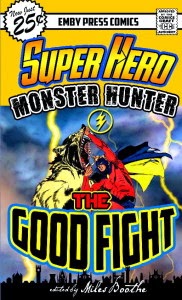 Emby Press is the premier publisher of monster hunter fiction, and as a crazy huge monster hunter fan, it's an incredible honor to be featured in one of their anthologies.

What's especially exciting is that The Good Fight is a sort of genre mash-up, focusing specifically on superheroes fighting monsters! It's like my two childhood worlds colliding!

Of course, this style of story has been done before. I remember quite vividly when DC Comics published the first Batman/Dracula Elseworlds story. I was blown away by that story, my imagination completely captivated by Batman taking on vampires. It was that story that got me back into collecting Batman comics for awhile (though I have to confess that "normal" Batman--aside from Batman: The Animated Series--was never quite as cool to me as the Batman-as-Van-Helsing motif).

Last year, I caught up on my Tomb of Dracula reading, and it was always a bit of a thrill to see more traditional costumed superheroes crossing paths with the King of Vampires. It's a combination that probably shouldn't work, but there's something ingrained in this subgenre that really speaks to me. 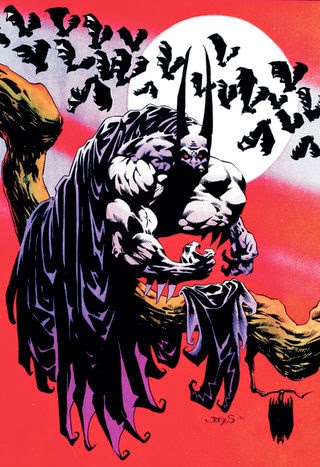 If you think about it, it is the most boiled down, pure, depiction of Good versus Evil. A monster represents humanity's dark side, reflecting our most carnal, selfish, violent impulses. A superhero, on the other hand, embodies everything noble humanity could be. Superheroes--as a concept--serve as a sort of moral standard of selflessness, bravery, and compassion. So, to have these two opposite forces clash sets the stage for all manner of commentary on the struggles we face in that battle between Light and Dark.

For my own contribution to this battle, I present "Red Fog"--a tale that harkens back to my first taste of "superheroes vs monsters" from Batman/Dracula, and stars a superhero of my own creation: Light Sphere. My readers might remember Light Sphere as he also appeared in my comic book-styled action adventure novel Rift Jump back in 2012. It turns out I've got more Light Sphere stories left in me and it was great fun to revisit him and plant him right in the middle of a harrowing vampire encounter (read more about the creation of Light Sphere here).

The Good Fight is due for release this fall from Emby Press, the perfect time for battlin' monsters. I hope you all check it out. Head over to the official announcement to read the full list of contributors to this massive volume of superhero horror!

In the meantime, if you haven't heard my other good news, don't forget that my first Syfy Channel creature feature Snakehead Swamp will air on Syfy, June 28th at 9 PM Eastern!
Posted by Greg Mitchell at 7:30 PM 1 comment:

Hey, folks. Been quiet on the blogging front, but don't think that means I've been relaxing. I've got some major projects on the horizon, including that "mystery novel" that I hope to be telling you all about very soon.

In the meantime, super huge news: I wrote a creature feature for the Syfy Channel!! Finally!

To be more accurate, I wrote it over a year ago, but am just now able to finally talk about it :) It is called Snakehead Swamp and, according to Syfy's schedule, it will premiere Saturday June 28th at 9 PM Eastern, following a day-long marathon of Syfy Original movies such as Chupacabra vs. The Alamo and Flying Monkeys (which is a super-fun flick, I'll say).

So what's Snakehead Swamp about? Well, I'm hesitant to say too much, but I will say that it takes place deep in the Louisiana bayou and concerns ancient curses--and man-eating fish, yo! 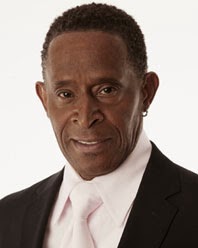 The movie is produced by Active Entertainment (the company that brought you Swamp Shark) and is directed by none other than Don FauntLeRoy, which was a real thrill for me. Don is the cinematographer on both Jeepers Creepers films, which are among my favorites of the new generation of monster movies. Not only that, but Antonio Fargas--who played Huggy Bear in the original Starsky and Hutch--came on board to play my Cajun hoodoo man! Of course, Mr. Fargas is only one of our players and rounds out a cast of great new talent and some seasoned veterans. I got to see a cut of this movie and was really proud of the performances coming from our fresh-faced cast of “fish fighters”. As with anything I write, I put a lot of heart into these characters and it was a thrill for me to watch an advance copy of the movie and see these actors really capture my characters so perfectly.

It’s no secret that I love B-movie creature features, as even my first novel The Strange Man was very much a homage to monster movies, in the vein of the ‘80s movies of my youth. For years I’ve longed to add my own entry into the canon of that particular genre of cinema, and I am so grateful to the guys at Active and Syfy for giving me a shot. They’ve been nothing but nice and supportive of me and I’m proud of the product we made, though we were faced with the usual budgetary and time constraints. I think the movie is a lot of fun, meant to be watched with a group of friends around a steaming pizza pie and the drink of your choice (a root brewsky for me :p).

I’m well aware that Syfy’s Original Movie fare, such as Sharknado, gets a bad rap from more serious-minded fans, and I’m sure they might feel that my excitement and pride in our little killer fish movie is misplaced. Look, we’re not trying to make The English Patient, here. Obviously there is a need for serious films that explore—maybe even improve—the human condition, but I believe that there has always been a place for B-movies as well. I think back to classics such as The Monolith Monsters or The Deadly Mantis, and I can’t help but smile. When I’ve had a hard day at work and the bills are piling up and the air conditioner in my car is broken, there’s nothing more refreshing to me than sitting down with a good old-fashioned monster movie. Are they cliché? Sure. Are they low budget with laughable effects? Sometimes. But can they be entertaining? Can they improve my “human condition” when I’m having a craptacular day?

With all the pain and suffering in the world, sometimes you just need a movie about killer fish to offer a harmless escape and give you a good chuckle :p

I hope you all will check out Snakehead Swamp when it debuts on the Syfy Channel June 28th, and remember: “This summer, the fish are biting…YOU!” While you wait for the premiere, you can head on over to the IMDB page and check out the rest of the cast and crew. And, as always, stay tuned to this blog for an announcement concerning my upcoming monster novel! [UPDATE: The book is here! Check out HITMEN: Four Tales of Magick, Monsters, and Murder]