After much hard work, my manuscript for the second chapter in the epic "The Coming Evil" Trilogy is now finished. It's approximately 128,000 words which puts it at nearly three times the length of the first book and it is bursting at the seams with new characters, startling revelations, and some surprising twists for the mythos. Now, in answer to the first question people ask me after they've read the first book ("When's the next one coming out?") we're not through with the waiting period yet.

As you know, I released the first book "The Strange Man" independently and I have no desire or intention of doing that a second time. The first book is slowly making the rounds and getting some good attention and it is my hope to have the entire series adopted into a loving publishing home. Now that the second manuscript is finished, I'll be hard at work pitching it to anyone who will listen. This means more waiting for you, The Dear Reader, but I believe it'll be worth the wait. This trilogy has been a long time in coming and I've been careful to take prayerful steps in the journey and I'll continue to seek God's direction and timing. In the meantime, pray for me and continue to get the word out on "The Coming Evil."

And, just so you don't think I'm a total tease, I'll reveal a tidbit of information that a lot of you have been bugging me about. The Title ;) The official title of the next installment will be...

"The Coming Evil, Book Two: Enemies of the Cross".
Posted by Greg Mitchell at 6:36 PM No comments:

...but it's neat nonetheless.

For the last year or so, I've been hard at work writing original content for a website debuting in 2008 based on the new line of comics that continues the Halloween film saga begun in John Carpenter's classic 1978 film!

My friend Stef Hutchinson is writing the comic book (more info below) and invited me to, basically, help him build the surrounding mythology and world for Halloween. I've loved Halloween for a long time, and have prided myself on collecting a whole bunch of obscure information gleaned from 30 years of tie-in material. A lot of that has been buried and, while I wasn't able to resurrect it all (for copyright reasons or what-have-you), I WAS able to integrate some of that old material into the new, and for a continuity buff like me, that's very exciting.

The new MySpace page is up for the Halloween Comics, so feel free to drop by and look around.

Also, in addition to the The Coming Evil Official MySpace Page, I've had to make a more general MySpace page for myself to put on the Halloween site. So drop in and add me if it so moves ya.

Beginning in February, the original storyline begun in John Carpenter's 'Halloween' will continue with a new comic book series from Devil's Due Publishing.

"Michael Myers returns! On October 31st, evil descends on the small town of Russellville, Illinois. A young girl named Lisa discovers that a secret from her past has come back to haunt her, and he's leaving a trail of bodies in his wake!"

Each issue of this series will feature, amongst its variants, an alternate comic book by a "Master Of Comic Book Horror!" The "Masters Of Comic Book Horror" cover for Issue 1 is painted by the legendary Bill Sienkiewicz (Stray Toasters, Elektra, 30 Days of Night)!

The series will be supplemented by a dedicated website, opening later in 2008 - www.halloweencomics.com

The available covers for issue 1 are as follows:

Issue 1 is available in February, but you can make an order with your local comics retailer right now!
The following link will tell you the location of your nearest stockist! 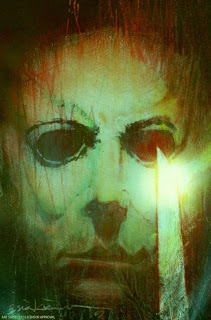 Posted by Greg Mitchell at 4:58 PM No comments: