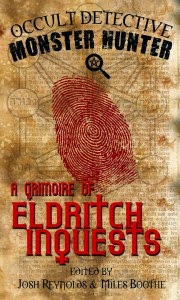 Howdy, folks. Some great news this weekend, courtesy of Emby Press. My short story "Divide and Conquer" has just been accepted for their Occult Detective anthology A Grimoire of Eldritch Inquests! The two-volume anthology is edited by Emby mastermind Miles Boothe and Joshua M. Reynolds--author of the super-awesome Royal Occultist pulp occult detective stories. Not only that, but my buddy Bob Freeman (read my most recent interview with him right here) has been tapped to contribute and write the foreword. I'm thrilled to be a part of the collection and am, as always, thankful for the chance to work with Emby Press and their impressive Monster Hunter line of anthologies.

My story "Divide and Conquer" is an original tale featuring an early case of my own occult detective, Vinnie Caponi: Urban Mythologist. As you should know by now (because I've posted a lot about it), Vinnie is one of the main heroes in my new book HITMEN: Four Tales of Magick, Monsters, and Murder. It was great delving into his old case files for another adventure with his faithful sidekick and brother-in-law, Josh. I love writing these two characters and I hope you enjoy my wild and woolly tale of...well, I'm hesitant to say what particular nasty they go up against. But, suffice it to say, it'll be wild and woolly. Fans of my The Coming Evil Trilogy should also take note of this short story as it includes one of my Arbigast Group characters from Lengthening Shadows. You won't want to miss it!

I was sort of a late(r) bloomer to the occult detective genre. I seemed to always be around it without ever really recognizing it. Growing up, my best friend Johnny was into Lovecraft and paranormal investigators and movies/shows like Angel Heart, X-Files, Lord of Illusions, and To Cast A Deadly Spell. I knew all these things through him and learned to enjoy and appreciate them. I even fashioned Johnny into an occult detective for my series of "Hitmen" home movies: you guessed it--he was the inspiration for Vinnie Caponi. Over the years, my love for pulp horror like Lovecraft and occult detectives have grown and developed, but the genre will always remind me of my early teen years at Johnny's, playing the Call of Cthulhu role-playing game, and talking about ancient tomes and eldritch horrors. Good times.


Look for the first volume of A Grimoire of Eldritch Inquests later this year. As of this writing, I'm not quite sure yet which volume I'll be included in, but they'll both be worth the look. In the meantime, get caught up on Vinnie Caponi by checking out HITMEN (available in print and ebook) or by reading this vignette of Vinnie's origins--for free, yo!
Posted by Greg Mitchell at 6:00 AM No comments: