"Keepers of the Dead"--An Interview with Bob Freeman

Today, we've got a new interview with Bob Freeman, real-life paranormal investigator and writer of occult tales. Recently saw the release of Bob's new book from Seventh Star Press, Keepers of the Dead, the second installment in his Gothic horror Cairnwood Manor saga. 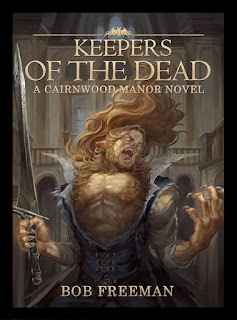 I always love having Bob stop by, so let's jump right into it:

Greg Mitchell: Bob! You’re back! And with the second novel in the Cairnwood Manor series: Keepers of the Dead. Tell us about it.

Bob Freeman: Thanks for having me, Greg. Keepers of the Dead picks up a few months after Shadows Over Somerset and the stakes are much higher. Michael is just settling into his role as the alpha of the Cairnwood Pack when his whole world gets turned upside down and he is drawn into a conflict with a sinister cabal intent on raising a demon that’s been locked away in the belly of Rosslyn Chapel for centuries.

All the main cast is back for this one, plus, I hope, some interesting new faces.

GM: It’s funny; in preparation for the release of Book Two, I went back and re-read Shadows and kept thinking, “This is classic Bob Freeman.” You’ve got a Gothic Scottish mansion/castle in the Indiana heartland, with witches, werewolves, vampires, secret societies, occult detectivery (new word), and Conan-esque swordplay. It’s a very unique blend of a sort of “horror high fantasy” crashing into Small Town, America. I’ve never seen anything quite like it, and it’s pretty exciting. In our last interview, you talked about the real-life inspiration for the kernel that became the Wolves of Cairnwood, but when it came time to start putting pen to paper, what were some of your inspirations for crafting this surreal fantasy world?

BF: Nick Mamatas and I had a chat at a convention a few years back and he said the biggest mistake almost every first time novelist makes is dumping everything they have an interest in into that first work.

Shadows being my first, I can honestly say, guilty as charged.

I grew up obsessed with Universal Monsters, Dark Shadows, and The Night Stalker, and I read more than my fair share of gothic paperbacks as a kid living in rural Indiana. I discovered Lovecraft and Howard at a young age, and later was really into Katherine Kurtz’ Adept series. And, obviously, I’ve always had a fascination with the occult, its practices and practitioners. I think if you tossed all of that into a blender, mixed in my love for local history and folklore, a smattering of everything from William Castle to Terence Fisher, and Dan Curtis, plus a little Highlander and the gods only know what else that my primal brain has latched onto and you get the whole insane Cairnwood Manor saga.

GM: As it was with Shadows Over Somerset, I believe this is the second edition of Keepers of the Dead. Anything new to discover inside?

BF: Well, it had a tighter editorial hand, a couple of name tweaks here and there, and prettier packaging, but the story stayed the same.

I’ve toyed with the idea of doing a major rewrite of the whole thing, but, it really is a kind of time capsule of who I was at the time, what kind of writer I was, and to alter it too much would disrespect that.

GM: I can understand that. I went through a similar process when reworking my Rift Jump stories from the original high school days to the "real" version. Trying to change it, while also keeping it true to who you were back in the day.

So, you’re working on the next Cairnwood Manor book at the moment, correct? Is that the final one? What can you tell us about it—or is that a secret?

BF: Without giving anything major away, Shadow of the Wolf has time-travel, alternate realities, and what I hope are surprising guest appearances by characters from some of my other works in store.


The story takes place roughly 15 years after the events in Keepers, but also spends a fair amount of time in the 1880s. There’ll be plenty of hairy action, romance, and swordplay, with, I hope, more of a gothic atmosphere.

GM: That all sounds fantastic. I'm totally on board for that ride. And what of your other projects? I know you’ve got to be working on, at least, five other things right now, ha. Are we still looking at a revival of your paranormal investigators Wolfe & Crowe? What’s your signature creation Landon Connors up to these days?

BF: I’m working on Shadow of the Wolf, of course, plus an occult detective fantasy novel, and a weird western, but my mind is constantly drifting into Landon Connors/Wolfe & Crowe territory. I just can’t help it.

I would love to find a publisher who was as interested in Wolfe & Crowe as I am. I still consider Descendant my best work to date.

As for Dr. Connors, he’ll be appearing in a month long serial on my website, occultdetective.com, throughout February, if the gods are willing and the creek don’t rise.

You know me, Greg, I’m a storyteller at heart. The medium isn’t as important as the story itself and I’m always looking for ways to get that story told in some fashion or another.

Readers are such a small audience and I’d swear 80% of them are writers.

GM: I'd believe that.

BF: I’m always looking for some way to get my stories out there. I recently adapted Mourn Not the Sleepless Children as an audio drama being produced by Openly Gamer and I wrote an episode for one of their upcoming ‘actual plays’.

I really dig the idea of cooperative storytelling. I’ve been playing RPGs for almost forty years and I’ve tried my hand at developing occult detective themed board and roleplaying games and could really see me heading even further down that rabbit hole.

GM: I would be remiss if we didn’t talk about your son, Connor. He’s got a new book out, as well—his debut! That’s gotta be great as a father, right? Spill the details, man! 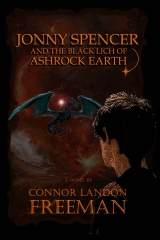 Connor is home schooled and, when he was ten, my wife Kim and I decided to add creative writing to his curriculum. Well, he up and ran with it, creating Jonny Spencer and the Black Lich of Ashrock Earth.

His new project, Word Hollow, is a sort of midwestern gothic fantasy, with demons, werewolves, monster hunters, talking birds and cats, and more.

BF:He’s a very creative kid and he and I spitball ideas every day. I really am one lucky guy.

GM: One of the things I love talking with you is inspirations. What shows, movies, books, games has got you excited these days?

BF: There’s so much great stuff out there:

I’ll continue to preach my love for the Lovecraft-inspired tabletop game Elder Sign. It has two expansions, Unseen Forces and Gates of Arkham, with a third coming out soon called Omens of Ice. What’s great about it is you can play it as part of a group or all by your lonesome.

I’m digging the X-Files revival and Lucifer on Fox, Syfy’s The Magicians, and the CW's run of superhero fare is must-see-TV at our house — Flash, Arrow, and Legends of Tomorrow. A friend of mine turned me on to a show out of New Zealand called The Almighty Johnsons that is absolutely absurd, but I couldn’t help but watch. It’s about these four brothers who are, it turns out, reincarnated Norse Gods.

What else? If you haven’t seen Crimson Peak, you bloody well should.

GM: I know, I know. That's on my list, when the Blu-Ray hits. I'm sorry to have missed that one in the theaters.

BF: I’ve been reading mostly bad paranormal non-fiction here lately, unfortunately. I get sent a lot of review material and most of it just isn’t up to snuff, you know.

I’m really hungry for a really great occult detective novel or a collection of short stories that goes above and beyond, something different and unexpected.

GM: Thanks, Bob, for coming out. Now I’m off to read more of Keepers of the Dead—now available in print and Kindle!

BF: Thank you, Greg. It’s always a pleasure.
Posted by Greg Mitchell at 6:00 AM No comments: