"Enemies of the Cross" Commentary (Part I) 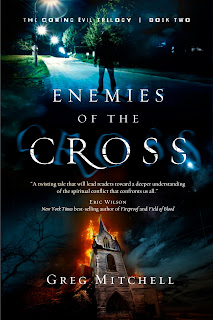 Well, folks, it's that time again. Book Two of The Coming Evil Trilogy--Enemies of the Cross--has been in stores for a couple months now! Do you have your copy yet? By now some of you have already read it and have, hopefully, been entertained and surprised by the direction the series has taken in its second installment.

Like we did for the last book, I'm going to walk you through the commentary for Enemies of the Cross. However, unlike last time, we're not taking a blow-by-blow account of what's going on in every chapter. Instead I'm going to be covering certain topics that are introduced in Enemies.

As always, MAJOR SPOILERS FOLLOW. Read at your own risk.

First up--the thing that I was sure was bound to excite, confuse, and disappoint people: Dras is alive!

It was always my intention to have this "double fake out". Only a few readers seemed to doubt whether or not Dras actually died at the end of The Strange Man. I purposefully left it vague, but didn't want to leave you all hanging for long. So, in the prologue for Enemies, we quickly inform you that he lived. No doubt some readers are thinking "Yay! Dras is back! On with the story!" while others are thinking "Aw, man, he's alive? What a cop-out." So, I took the middle road--he's alive...and then we promptly remove him from the story, save for that prologue. In fact, he doesn't have a single line of dialogue.

I watch a lot of horror movie sequels. And, time and time again, I discover that the stars of the previous installments are nowhere to be seen in their sequels. Sometimes the hero or heroine has moved, sometimes they died off camera (or sometimes they die in the opening minutes). Some of the supporting cast might still be lingering around, but the hero has moved on to bigger and better things. Usually it can be tracked back to the stars of the originals wanting more money than the studio is willing or able to pay. So those characters are written out of the story and some minor character is given the spotlight instead. Usually when that happens, it's disappointing. But sometimes--just sometimes--it can work.

I like writing with complications. I like setting handicaps for myself to see how I can get out of it. In a novel, I know I don't have to worry about actors' salaries and could have had Dras be all over that book. But, since this was always intended to be a horror movie franchise, I decided to follow the horror movie tropes and put myself in a bind--how do I tell this story without my main character? Suddenly the task fell to the first book's supporting characters. Who are they? Can they carry a whole story? When I wrote the initial script-draft of Enemies over ten years ago, I had a blast writing it. I discovered so much about my "B-listers" as the supporting cast took on a life of its own. It was very rewarding to continue the mythology without Dras, just to see if I could. Did I succeed? Well, I think I did, but I guess ultimately that's up to the individual Reader's judgment :p

As the years (and the drafts) have gone by, I've seen that it's essential to tell Enemies without Dras. He was the glue holding this family together--a fact the characters didn't really understand until Dras was gone. Also, Dras chose to stay and fight the Strange Man in order to save Rosalyn--it's what cost him his freedom and nearly his life. To have Dras pop up in this book and carry on the story seemed to demean his journey in the first book. For The Strange Man to be an effective story, Dras had to die...if only for a time.

If you've read the Book 3 excerpt at the end of Enemies, you already know that Dras' story is not finished yet. There's more for him to do and it will be interesting to re-insert him into the story after the supporting cast has taken center stage and grown so much. What will their relationships look like?

More importantly, what will Dras do when he finds out what happened to Rosalyn?

Head over to Part II where we meet our newest addition to the trilogy!
Posted by Greg Mitchell at 6:02 AM