In our second installment, we meet Danny Carpenter--the new addition to our cast. 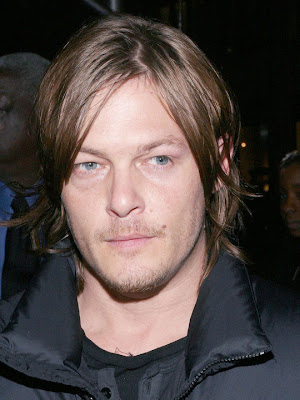 Ideally, I always saw Danny as played by Norman Reedus. In a lot of ways, Danny is a sort of Dras v2.0--which is subconsciously why Jeff wants to help him. He's a dreg of society, a fool, someone that everyone has counted out, and nobody would suspect he'd ever rise to a heroic occasion.

But Danny proves them all wrong.

I've known a lot of Dannys in my life. Drug addicts that have struggled with their demons and have bouts of tremendous faith and courage and decency. Sometimes they have stayed the path, other times they've fallen back into their addictions. I've known them to hit their wives, neglect their children, break their father's heart--but I've also seen them care for the innocent, stand up for the rejects, and fight for their beliefs. I've never known them to just be "bad people", but rather conflicted people. I think they can be capable of great things if given the chance, and that's what Danny represents.

He is not a good guy. He's a drug dealer, a wife beater, and general blight on the face of society. But Jeff befriends him and, through that friendship, Danny begins to want to change.

I took a little bit of flak for The Strange Man with Dras. Dras spent the earlier part of the book as a drunk (though I never envisioned him an alcoholic--just a young partyer) and layabout. Some saw his mid-book turnaround to devil smasher unconvincing. Some said "There's no way he'd turn into a good guy so fast." Well, to that I say "phooey". First off, Dras had a solid Christian upbringing. He strayed from that in his young adulthood, but he had that foundation to return to.

Danny had that upbringing to a lesser extent (being partly raised by his grandma), but I've seen his kind of change happen in real life. I've seen a hardcore drug dealer turn their life around in a single night. Yes, the shadows of their old life linger and they struggle with it for the rest of their lives, but they can change. They do change. It can happen.

Plus, in both the cases of Dras and Danny, I think people discredit their experiences in the book. They are learning that flesh and blood demons are real and in their world and butchering innocent people. I don't care what kind of addictions they suffer from or what kind of attitude they have--most people are going to respond to that. They're going to want to fight that. Fear and righteous anger are strong motivators for change.

What I love most about Danny is that he spends most of the book living more honorably than Jeff--the pastor! Ultimately, that's what Danny is there to show. That we Christians can get so caught up in ourselves and our self-righteousness that we behave shamefully, while "heathens" like Danny Carpenter are actually responding in more Christ-like ways. I've been shamed in my own life by those whom I thought were "not as good" as I was. Also, there are plenty of stories in the Bible of pagans behaving more godly in a situation than some of God's own people. Each time that teaches a lesson and keeps us humble.

Danny inspires us to not count out those we deem as unworthy, but to search our own hearts to see how we have failed, ourselves. All need forgiveness. All need Christ.

In our next installment, we'll peel back the curtain and learn more about those shadowy figures working towards Greensboro's destruction: The Committee!!
Posted by Greg Mitchell at 6:00 AM