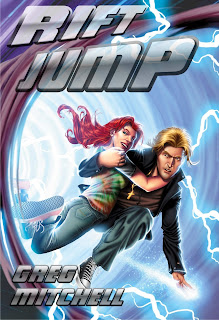 I debated on whether or not I wanted to do a commentary for Rift Jump, but aw, what the heck. Here we are. As the novel Rift Jump is broken down into five parts, I'll do likewise for this commentary, giving each "episode" its due every Monday for the next five weeks. So let's start with the Prologue and Part One: Little Brother.

As usual, be aware that there are HEAVY SPOILERS below. Read at your own risk. Or, better yet, go buy the book, read it, then come back here. I'll be waiting :)

Let me say that, at the risk of sounding egotistical, I love this prologue. This section is one of my favorite things that I've written. It's got a very Starship Troopers feel and shows a good man making his brave and final stand. It's full of quiet heroism, bittersweet determination, and unbridled courage. And, while this section features an army of gnarly monsters--they are not my focal point. The point of the prologue is to introduce you to one of many Michael Morrisons that populate the multiverse. I wanted you to get a sense of the pure evil that this guy is capable of. He doesn't say a whole lot, but the way he tears through these guys Darth Maul-style speaks volumes of his skill and cunning. That way, when we switch to a new Michael Morrison in the next section, you have some idea of the terrible things he could accomplish, as well.

1. Yes, there is a big fat typo. "Slashed" is misspelled "sl6ashed" in once instance. Embarrassing, yes. But weird mistakes happen at the last minute in the editorial process. In fact, I think I know the source of this particular mistake. Let me introduce you to her: 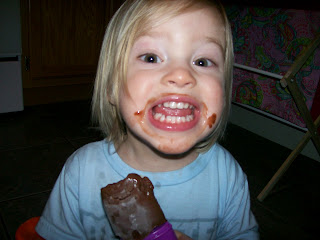 This is my two-year-old daughter Dani. Cute, isn't she? Well, don't let that adorable face fool you. She likes to sneak into my Batcave when I'm on a bathroom or snack break, maximize whatever book I'm working on and add her own little edits to them :p I'm just thankful it was only a "6" she got away with and not a "djjfoieafjoeikjnvpoiau" as I've found in some works-in-progress. Now THAT would have been tough to explain.

2. This army of monsters was ORIGINALLY going to be black-goo monsters similar to Ray McCormick from Book Two in my The Coming Evil Trilogy--Enemies of the Cross. Yes, Rift Jump and The Coming Evil are related. It's a big multiverse. We'll get to that more another time. But I didn't want to make the connection so blatant, so I created these new creatures. I've got a whole backstory for them, which you will learn all about in the sequel to Rift Jump I've already started writing. As for that army of black goo monsters...well...keep your eyes peeled, heh heh heh ;)

So, as you're no doubt well aware of by now (as I seem to talk about it nearly every interview/write-up), I wrote the very first Rift Jump story--Second Chances--back in high school. To read it in all of its terrible glory, see Appendix B of Rift Jump. It was very much a product of my life at that point. I was 15 or so, so I made Michael 17. Oooh, an older man. How cool and mysterious, right? Also, I threw in this little info bit that Michael had been rift jumping for 5 years. I didn't want to make him a rookie, right? Not only that, but I gave him this tortured backstory about how he was a "hitman" before God recruited him for this hero thang. Not only THAT, but he also murdered the Sara Theresea of his world! Oooh, he's a bad man!

It only took me about ten or so years to realize that, if I did my math correctly, then he was all of 12 years old when he was this famed hitman and murdered this girl and recruited by God. Looking back, it was pretty stupid. But, a few years ago when I felt like knocking out a Rift Jump story for old times' sake (before I had any inkling to publish it), I thought, "You know what? Let's not ignore the stupidity of that backstory. Let's meet it head-on. In fact, let's make it make sense. Let's make it awesome." I sat down and wrote the first draft of "Little Brother" as a Book Zero to "Second Chances" one afternoon and really tried to get into the mindset of a twelve-year-old kid who had committed murder. I thought that, surely, Michael had to be some type of sociopath, so I didn't shy away from it. As my wife was reading Rift Jump for the first time last week, she said that Michael seemed like the kind of kid who would take a gun to school and start shooting. And that's right! He IS that kind of kid--if his double from the Prologue is any indication. Michael is capable of heinous evil, and his whole journey in this book is to battle that and become a good man.

Eventually, we see Michael meet his end. He finds God in the desert, wearing a Stetson. At this point, you may wonder "Why put God in a Stetson?" And, at this point, I shrug and say "Why not?" I liked the Western vibe. It made it personable and, if I dare say, a bit iconic. For those keeping score at home, I always imagine God in this book sounding a lot like Liam Neeson :p Patient, but powerful.

Something that was tricky in this section is that it takes place in 1991. Since I wrote the original stories back in 1996, this fits into the "five years thing" and pays homage to those original stories. Only, I didn't want to come out and say in a date stamp "The Year Was 1991". Because, modern novels don't make the distinction that the year is 2012 or whatever the publish date might be. It's 1991 to Michael, so it should be 1991 to the Reader, without me having to break the illusion and tell you such. However, all my mentions of Walkmans REALLY confused my editors who just thought I was woefully behind in the times, so I dropped some  references to Terminator 2 and Guns N' Roses and Straight Outta Compton to help you figure out what year it was. I probably overdid it, but ah well. Michael doesn't stay in '91 for long.

1. Coach Seevers was really one of my teachers in high school. And he looked just like I describe him in the book. He taught history, too, and every year we watched Glory in his class. I think I had him for two classes in one day--so we watched Glory twice. To this day, I still love Glory :) Coach was awesome. He told us that he worked for the government and that, when he was absent from class, it was because the President had called him in on a top-secret black op. He also boasted that he had a gun in his desk drawer and if any of us tried to come at him to mean him harm, he was specially trained to have that gun out, locked, and aimed at our punk heads in .23 seconds, ha ha. He was awesome. I always wondered if he REALLY had a gun in that drawer, but I wouldn't dare peek ;)

2. Other characters such as Johnny Frawl, Edward, and Seth were all based on my friends--though names have been changed to protect the guilty. Back in the day when I first wrote Rift Jump stories, I didn't look very far to find characters to populate my stories.

Click over here for Part 2 of our Rift Jump commentary! Teen lust abounds! In the meantime, in honor of Coach Seevers, my most favorite scene from Glory. Denzel's performance still gets me.