Well, I've been sitting on this news for awhile (since Christmas, when all this started) and I'm near ecstatic to finally be able to share it all with you.

I am officially writing "Apocalypse V" for Cloud Ten Pictures!!

"What's Apocalypse?" you ask. For shame. For. Shame.

Allow me to educate thee.

Back in 1998, when "The Coming Evil" was still forming in the murky depths of my monster-laden imagination, I was easing into the Christian film industry. I had already met Rich Christiano (who I later collaborated with on the novel "Time Changer") and was even an extra in his End Times/Revelation flick "End of the Harvest". At that time, I was pretty much soaking up every Christian film experience I could, trying to see what had come before and figure out how I was going to be different and add my two cents to the whole thing. As you may or may not remember (or you may be trying to forget) there was a sort of "Millennium Fever" at the turn of the century, and between the "Left Behind" books, and "The Omega Code" movies (the second one had Kyle Reese, yo!), and Rich's own "End of the Harvest", there were a LOT of "End Times" flicks. I'd kind of grown sick of the whole thing, which is one of the reasons I stressed to everyone that "The Coming Evil" was NOT an "End Times" story. But, my church was having its first ever movie night and what are they going to show? 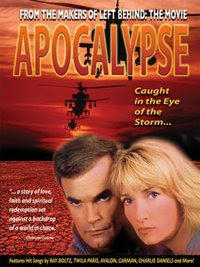 Another End Times flick called "Apocalypse". Well, good grief. So I watched, prepared to roll my eyes and tear the flick a new one.

However, much to my surprise, I found that I actually really enjoyed it. Yeah, it was shot on video and had the budget of a Craft catering table (perhaps a very small one), but there were characters that I was invested in (Leigh Lewis as Helen Hannah is an underrated gem. She appears in all the movies--mine included, I hope!!--and turns out quietly compelling and commanding performances every time), and a bad guy who was so awesome in his zany over-the-top evilness (Len Parker. Watch the movie, he's great) that I found myself wanting to know more. 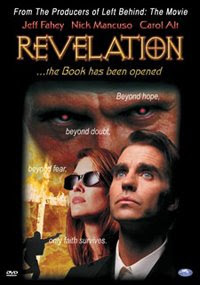 I put "Apocalypse" out of my mind, moving on to begin writing my non-End Times Christian extravaganza in "The Coming Evil", but was curious when, a year later, the sequel "Revelation" came out. I watched it, because I'm a sucker for sequels, and REALLY enjoyed it. The production was elevated exponentially and they brought in a great director (some new guy named André van Heerden) who really gave it a very polished look (despite the still limited budget). Plus: Jeff Fahey! You mean, "Psycho III" Jeff Fahey?! Yes, I do! There was action, some great genuine character-driven humor on the part of Tony Nappo's character "Willie Spino" and a big boost in the mythology. What? A mythology? Well, now you've got me hooked. 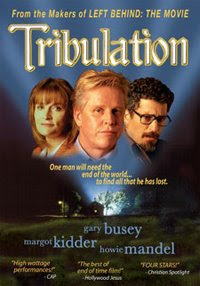 Soon after that, part 3 was released. "Tribulation" with "Silver Bullet"'s Gary Busey! Hecks, yes! I really, really loved part 3. It had the occult, psychic phenomenon, a definite horror slant and continued to push the mythology and expand the characters. By this point, I was ready to jump in to write my own. It was still '99, I think, and I was convinced I could push the continuity even further. I was ready! But...alas, I had no idea what to do about it... 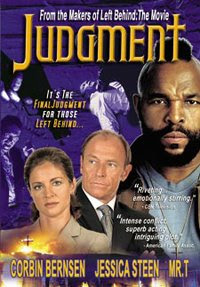 A couple years later (2001, I think), "Judgment" was released and, I'll tell you, I was a bit disappointed, at first. Coming off of "Revelation" and "Tribulation", I was expecting explosions and psychic enforcers and demons. But...I got a courtroom drama. It felt like a very quiet note to the end series on and then "Apocalypse" faded from the public eye...

So, it happens that last Christmas, my brother (a writer and mythology nut in his own right--go check out his stuff) and I decided, just for kicks, to pop in "those Apocalypse movies" and watch them again. I found myself JUST as entertained, if not more. Even "Judgment" shone through and I really understood all that movie had to offer--including Leigh Lewis' best performance to date (I think) and an exceptional full orchestral score. The "End Times" movie craze had thankfully slowed down (too much of a good thing, you know?), but I found that, even without that hysteria of impending global disaster, these movies still held up. Because, like I said, there are characters to believe in. Plots to follow. Villains to boo. It's FUN, man! Suddenly, all of my old ideas about how I would contribute to the series came flooding back in a wave of blissful nostalgia, and after a casual comment from my brother that Wikipedia said there was a proposed "Apocalypse V" on the horizon, I decided to seize my chance to make one of my dreams come true.

Out of the blue, I cold-wrote Cloud Ten and told them of my love of the series, a few of my credentials as a writer, and expressed my desire to try out for Apoc 5. I was thrilled and subsequently terrified when, the very next day I believe, that "new guy" director André van Heerden--now the CEO of Cloud Ten and the director on the last three films--wrote me back and asked for a pitch.

I spent all Christmas break cramming in everything I loved about "Apocalypse" and turned it in. And I had a BLAST doing it. What's more, Cloud Ten was interested. From that point on, André and I conversed quite a bit, eventually bringing in Paul Lalonde (head honcho at C10 and the co-creator of the entire franchise!!). We had lots of talks, going back and forth on the different characters we loved and how we might bring them back and use them again. We worked out story points and plot twists and I signed a contract and eventually turned in a first draft.

And they accepted. I "got the job". I'm writing "Apocalypse V".

Needless to say, the process to produce a movie is a perilous one and anything can happen along the way. But, for this one moment, I've achieved a dream as a fanboy crossing over into the series he follows so closely. It's a treat and I promise to do my level best to turn out the best "Apocalypse" yet.

PS--Now, for your viewing pleasure, feast upon the trailers for all four "Apocalypse" movies and get ready for Part 5. Written by me! :p And, of course, if you like what you see below, go buy the movies!

Greg,
I think they picked the right guy for the job. You're mix of horror and apocalyptic fiction sounds like just the right match.

You've got the right vision for the movie!

HUGE!
Still jumpin' on the bed, are ya?
From what I know of your writing through your submission to the Underground Anthology, Cloud Ten's found a guy who knows the craft. A victory for them, and you're obviously a little excited as well.
8D
Congrats, man!

Frank Creed.com: the official site of Flashpoint: Book One of the UNDERGROUND

The Finishers.biz: Polishing Manuscripts until they Shine

Awesomeness squared! This is beyond cool, Greg. Have at it!

I added your film to CFDb, can't wait to see it!

I've been ready, when will it come out?

Unfortunately, I think it's safe to say that this project is dead in the water. For my part, I turned in a finished script (that I was very proud of), but the producer got the opportunity to remake Left Behind with Nicholas Cage and our little movie was shoved aside. That was the last I've heard anything and that's been many years already. If there ARE plans to revive this series, no one has told me, but I wouldn't hold my breath. Sad, though. I really had high hopes of delivering a poignant and epic finale to the series.

Don't give up. I believe in the name of jesus, It will happen and come to past, People/fans waited for this, the story's unfinished. It's gonna happen, my dream has always to be actor and singer. IT WILL HAPPEN! What happen after helen escapes, return of willie spino, fans love him, etc.