Hangin' Out with Bob Freeman, Author of "First Born"! 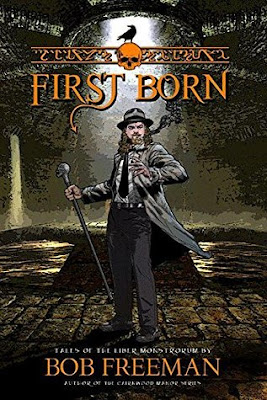 Well, hello there! It's been quite awhile since I've been 'round these parts, but today I've returned to the Internet for a special occasion. My buddy Bob Freeman has got a new book out--First Born: Tales of the Liber Monstrorum--and you should know about it! To celebrate, I've invited Bob back to the blog for another palaver about his latest publication, inspirations, future projects, and anything else we have a mind to discuss. So, on with it!

Greg Mitchell: It's Bob! He's back! What have you been up to recently? 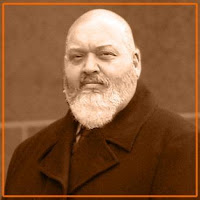 Bob Freeman: Thanks for having me, Greg. It's good to be back. I'm still hard at work being the best husband and father I can be, all the while indulging in my various and sundry eccentricities.

GM: You've got your priorities in the right place, there. Let's talk about the new Landon Connors book, First Born. This is the first book in your massive Liber Monstrorum opus, yes? What's the skinny?

BF: First Born was a chance to put most all the Landon Connors/Wolfe & Crowe stories that I've written so far under one roof. I say most because I only included those stories that take place before Descendant, which will be the second volume in Liber Monstrorum.

GM:  I have to say that, though I know you've published most of these stories in other sources, reading them all in a single volume--with the stories arranged in chronological order--really brings it to new life. You can see the sprawling occult epic like never before, and I made so many more connections between the various stories than I did when I was reading them scatter shot across various sources.

I know you're never supposed to ask a writer this, but is there any particular story that sticks out in this collection as your favorite? Or, when putting them together, did something previously unknown to you about your story world jump out?

BF: Wyrdtails, in a lot of ways, because I think it has an interesting twist and there's a lot of truth I put down on paper. My best friend passed away less than a month after writing that story, and in some ways, I think it was prophetic. In fact, it's only now that you ask that question that I'm somewhat staggered by that revelation.

GM: I recall Wyrdtails as having a heavy feel to it. What's next for Landon Connors?

BF: Well, there's his role in the collaboration you and I are putting together, but I suppose that's as much of a tease as we should give your readers.

GM: Too true! Yeah, Bob and I are at work on something that's proving to be an exciting exercise. But that will remain secret...for now.

BF: He has a minor role in Descendant, though his influence is ever-present. He's there between the lines, in the spaces between words. His role is far more prominent in Liber Monstrorum's third volume, Born Again, and then, I will look to wrap up the series in the fourth and final book, Afterbirth.

GM: I'm so ready for those. I've read an earlier incarnation of Descendant, but I believe Born Again and Afterbirth will be fresh territory for me to explore as a reader--and I'm happy to do so!

Of course, Landon isn't the only focal point in your mythos. How are the Wolves of Cairnwood these days? You've got one final book to complete that trilogy, right? Any update on that? 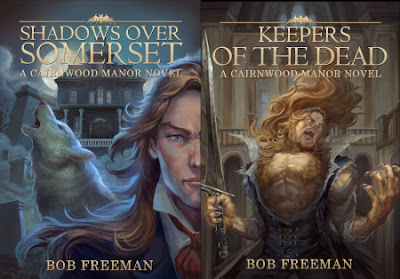 BF: I have been dropping hints, here and there. A lot of questions regarding the Cairnwood Legacy will be answered in Born Again, strangely enough. If sales warrant it, Shadow of the Wolf will come along after. If not, I think Born Again could satisfy that itch.

GM: Yeah, it's only been recently after some of the stories you've published online on your site (occultdetective.com, shameless plug) and conversations we've had that I've started to figure out how the two mythologies connect--and once I hit on it, it was incredibly exciting, but also very mysterious. I'm anxious to see how it all comes together.

Okay, books on hold for a second, though: Recently you (finally) watched Stranger Things. To say I love that show is a sad, sad understatement. This is the point in the interview where I give you the mic and let you expound your love for the wonder of Stranger Things.

BF: Look, I was born and raised in rural Indiana. I was 17 years old in November of 1983. I was an avid player of Dungeons & Dragons with a insane curiosity about all things "paranormal" and considered myself a student of the occult. Stranger Things was like holding up a mirror to my childhood in a lot of ways. It really hit home. Couple that with the obvious homages to Carpenter, Spielberg, and other milestones from the era, and well, it was tailor-made for someone like me. It was me...

GM: No doubt. It tugs at me. I switch it on, and I'm transported back in time. It takes me back to when I first saw the Monster Squad and subsequently rode my bike up and down the street, hoping to find a monster to hunt. I mean, it hits on all the right notes for me, and I can't gush enough about it.

But beyond that, what other movies/comics/books/TV has got you buzzing these days? What's inspiring you lately? How are you feeling about the X-Files revival take two?

BF: The latest X-Files has seemed a little stiff, but I'm still a fan. That being said, I have always liked the idea behind the X-Files far better than the execution.

GM: I can see that, though I have enjoyed this season considerably more than the last one.

BF: Millennium was a better show, as far as I'm concerned, and Fringe out X-Filed the X-Files by being more consistent and Twin Peaks sort of outshined it a far as revivals go by being far more edgy and, well, weird.

GM: I will admit, I ONLY RECENTLY watched the first season of Twin Peaks. Haven't made it to the second season yet. Hm...

BF: As for being buzzed, I'm a bit of a YouTube junkie and a real gaming nerd, so I spend a fair amount of time watching "actual plays" and tutorials. I think, if backed into a corner my three favorite "shows" right now are Critical Role (professional voice actors playing Dungeons & Dragons), Schola Gladiatoria (Historical European Martial Arts enthusiast Matt Easton's Sword channel), and Curse of Oak Island on History Channel.

GM: Having said that, I feel I should point folks to your own YouTube channel where you talk about tabletop gaming and RPGs!

BF: At home we've been binge watching a lot. It's been a great chance to share things I loved with the two most important people in my life. We plowed through Star Trek (all flavors), Babylon 5, Highlander, Twin Peaks, and Stranger Things, to name just a few. We're currently waist deep into Fringe (which I mentioned earlier) and it's been a real bonding experience for us as a family. I just wish I could get them to watch Veronica Mars :)

GM: With all these muses in your head, do you ever have trouble keeping them straight? I know that, in my own mythology, it sometimes gets so big and detail-orientated that I find myself having to re-read the various books to remind myself of how it all fits together.

BF: I think I have some sort of weird mutant ability to keep all that stuff straight in my head. Sometimes, if I've been away from it for a handful of months, I'll need a refresher, but mostly it all comes rather naturally. It seems like the stories have all already happened and I'm just the guy who drew the short straw and get to write them down.

GM: I can understand that. In my own experience, there is an almost instinctive quality to it, like you're just uncovering what's already there. What's your son, Connor, up to these days? I enjoyed his first book, Jonny Spencer and the Black Lich of Ashrock Earth (what a sweet name!) and understand he's working on other projects?

BF: Thanks for asking. I am more than passingly proud of that kid. I've just finished editing his first urban fantasy novel, Word Hollow, and I'll tackle editing its follow-up in a couple of weeks. That will make three books in four years for him. Not bad for a fourteen year old.

GM: No doubt! Thank you, as always, for stopping by to hang.

BF: Thanks for having me, my friend. It's always a pleasure. I have, for as long as I can remember, been obsessed with telling stories. The medium didn't and doesn't matter, whether it was playing with action figures, writing short stories, novels, or comic books, slinging dice from behind a DM Screen, or even sitting around a campfire spinning yarns. It is what I was born to do and I feel infinitely blessed to be able to do so.

GM: Well I, for one, have enjoyed your stories and love exploring the worlds you've created. Alright, everybody, that's your cue to go buy Bob's latest book: First Born!

ABOUT THE BOOK: From the arcane sorceries of the "Wickedest Man in the World" to the supernatural exploits of Occult Detective Landon Connors and the harrowing investigations of Agents Wolfe and Crowe, this collection of macabre tales of the black arts treads the dangerous landscape between this world and that populated by angels and demons, gods and devils, ghosts and spirits, and the legendary creatures of our darkest imaginings.

First Born is the beginning of the journey into the Liber Monstrorum, the Chronicles of those Occult Detectives who are the last line of defense against those preternatural forces that threaten to destroy a world that refuses to believe that such things exist...
Posted by Greg Mitchell at 6:00 AM