HITMEN: The Story Behind the Story 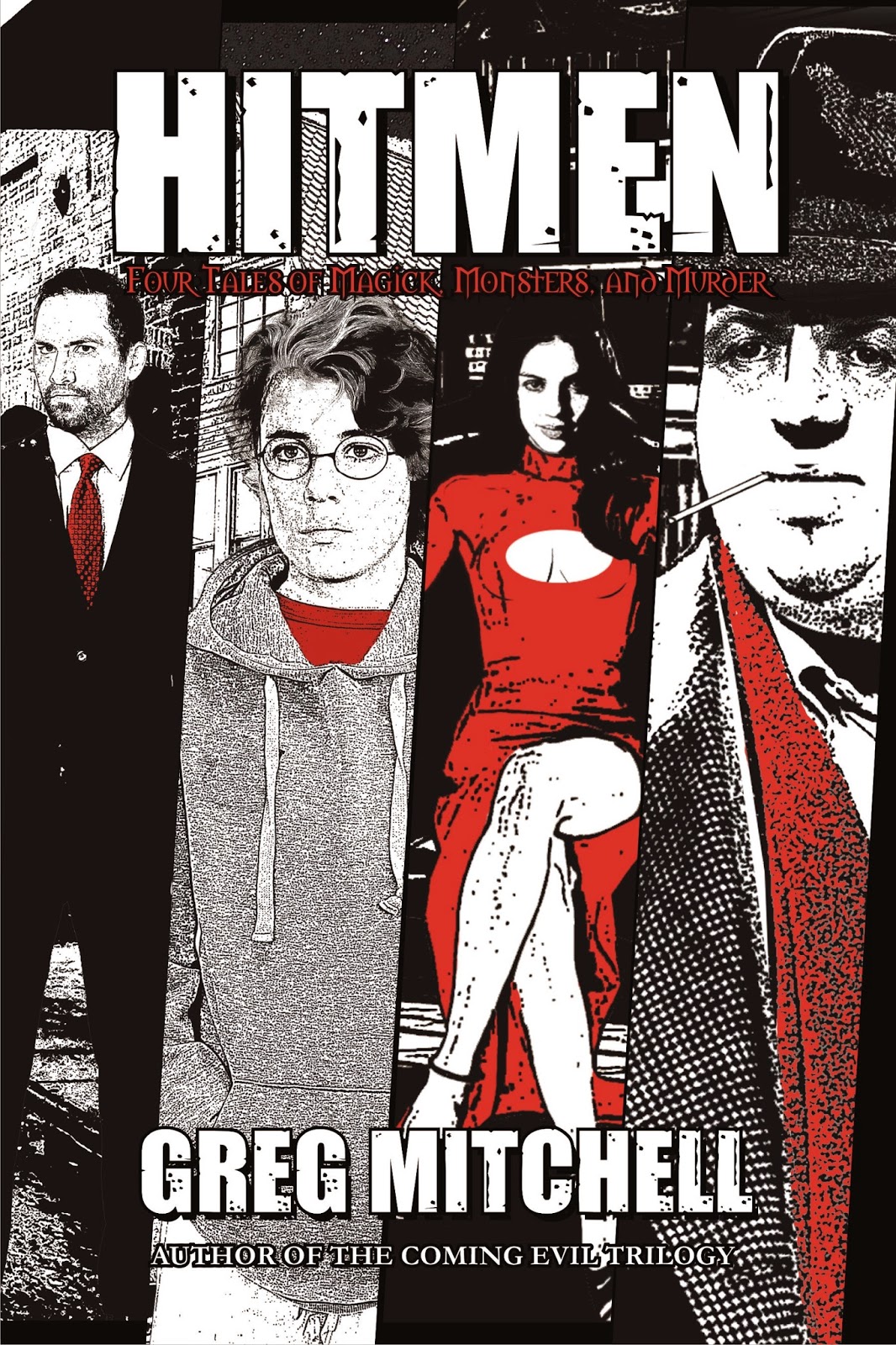 I'm pleased to announce that, in just a few days, my new horror novel HITMEN: Four Tales of Magick, Monsters, and Murder will be unleashed on the world. Similar to Rift Jump, Hitmen was sort of an experiment for me. It was an exercise in revisiting my past and dusting off an old concept that has been near and dear to me for a number of years. Today, I want to pull back the curtain a bit and share from the Foreword of the upcoming book to give you a glimpse into the story behind Hitmen.

The year was 1998. I was a couple years out of high school and trying to figure out what I wanted to do with my life. My childhood love of the horror genre was newly rekindled and I decided I wanted to write monster movies. I was getting my feet wet in independent Christian films and was starting to put together the story that would eventually become the novels in The Coming Evil Trilogy.

In a show of support of my new filmic aspirations, my parents bought me a video camera. I was thrilled and set out to draft my friends into my own amateur horror movies. I was still toying with the idea of merging horror and religion and set out to make an ‘80s style slasher flick with a twist. The original concept for Hitmen was simple: Jason Voorhees (of Friday the 13th fame) does great against half-naked camp counselors, but how would he fare against hardened hitmen with guns? I had a cheap plastic “blue skull” voice-changer mask that I bought on a lark at a Kay Bee Toys store some years prior and decided that would be the perfect frightening visage for my Jason-esque killer.

In the winter of ’98, I shot the first “HITMEN” movie on that little camera. I paid a small fee to go over to my friend, and Time Changer director, Rich Christiano’s house and cut it together onto a VHS tape. The movie was terrible—wonderfully so—but I was proud of that thing. I made a movie. My friends were supportive and didn’t complain too much when I called them at all hours of the day and night and gave them a simple “What are you doing?  Are you busy? Let’s go film.”


They showed up on time, faithful to read over my rewrites and spout out my silly lines with zero practice or rehearsal. We finished the movie, had a popcorn night with our parents, and laughed at the fact that we’d made our very own movie. I’m sure everyone thought that it would end there.

But, hey. This is me we’re talking about here.

Less than a year later, I had the idea for a sequel to my gruesome masterpiece. Once more, my friends (and now my little brother) simply got the call—“Let’s go film another one”. It didn’t end with that movie either, as I was now determined to create an epic home movie saga! Over the ensuing years, my loyal cast and crew followed me like a crazy-eyed Captain Ahab as I soldiered on through late nights and lunch hours and early Saturday mornings in search of a Moby Dick-sized vision. There was no pay. There was no distribution. There was no audience! Just the simple satisfaction that we were making something with our own two hands.

In 2005, I finished editing “HITMEN IV: THE FINAL CHAPTER”. By that time, I’d made the transition to digital editing and DVD authoring, complete with trailers, outtakes, commentaries, and deleted scenes. I made a couple new friends along the way, and had even gotten married—and, yes, they were all eventually drafted into my massive ongoing storyline of “HITMEN”. In the films, I starred as guilt-ridden reformed hitman Eli, my brother Jeff portrayed precocious young ghost hunter Flynn, my wife Meghan became the sexy villainess Marcie, and my best friend Johnny pulled double-duty as lovable Vinnie Caponi: Urban Mythologist and our fearsome supernatural foe, the Blue Skull himself.


Man, it was a ride. Writing each new script at a feverish pace; throwing my camera, lights, and tripod in the back seat of my car on a whim to go pick up “one more shot”; sneaking out to the woods and having a hulking monster chase my wife screaming through the foliage; staying up at all hours of the night editing with Johnny, laughing and dreaming up even wilder scenarios for future installments—that was my twenties. They were some of the best times of my life.

I never intended to show anyone outside our circle of friends our amateur movies. They are for us: a snapshot of a more innocent time. But, like the supernatural Blue Skull who slashed his way through our films, the “HITMEN” saga refused to stay buried for long. Fast forward to 2012. I’m right in the middle of publishing my magnum opus, The Coming Evil Trilogy, and I have this quirky idea to adapt some old stories I wrote in high school into a novel. That book eventually became Rift Jump, published in 2012 by Splashdown Darkwater. I had a lot of fun revisiting those old concepts and, as my mind is wont to do…I began to wonder: “What if I adapted those old ‘HITMEN’ movies?” They’d be greatly expanded on, of course, giving me the opportunity to do things we never had the budget to do in the original films. It could be bloodier, more action-packed—and way more ambitious, both in terms of character and story. A “Director’s Cut”, if you will. I was pretty excited, even as I laughed at myself for completely going off the deep end. That’s when I went to my former crew and cast mates and told them my idea of turning the four main Hitmen installments (we made a lot of spin-offs, you see) into a single “braided novel”.


And the response was near-unanimous: “You’re going to do what?” We all had a good laugh and I didn’t really think I’d follow it through, to be honest. But, just for fun one night, I watched through those movies again, lost in bittersweet nostalgia and remembering all the funny and poignant behind-the-scenes stories. I began thinking about what I would do differently now if I had the budget and with my improved writing skills. I started writing the first part—now called “The Saint”—and surprised myself by how natural it felt. Cautiously optimistic, I adapted the second movie and then let my wife read what I had so far. She actually liked it. Hey, maybe I was on to something.


I finished the book a couple months later and sought a publisher for over a year while working on other projects. No one was biting and, through it all, I kept thinking about putting the book out myself. It seemed only fitting. After all, all those movies we made, we made on our dime, with our own blood, sweat, and tears. I longed to experience that feeling of making something from scratch again. So that’s what I did. You’ll note that this book is published by Genre Experience: the same company that “produced” all those Hitmen movies back in the day. And, reminiscent of those bygone days of youth and excitement, I called up my pal, author/artist Bob Freeman at a moment’s notice and said, “Bob. I’m making a book. Can you do the cover?” Just like that, I’m fifteen years younger again, rushing off into the night to make monster movies with my best friends, making our own rules, entertaining ourselves.

I hope you’ll come along for the ride.

And now, for the first time EVER outside of my living room, I am about to show you the actual trailer to the fourth (and final) chapter in the original Hitmen home movie saga, with voice over done by Zachary Malcolm, who also played Pastor Loomis in the movies. I've never shown anyone these, except for friends and family, but I think...yes, I think the world is finally ready.