Last week, Weird Western author Ed Erdelac was tagged as part of the "Next Big Thing" Tour, where he was posed 10 questions about his latest book Terovolas (read his post here). As per the rules of the tour, Ed tagged another batch of authors to answer the same questions this week. Ed tagged me, so here I am, talking about my upcoming novel Dark Hour, the epic finale to The Coming Evil Trilogy, slated for an early 2013 release. Read it, yo!


1) What is the working title of your next book? 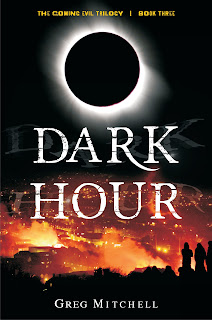 2) Where did the idea come from for the book?

Dark Hour is the final installment in The Coming Evil Trilogy, and the entire basis of this mega-story was my childhood desire to take my love for roller coaster monster movies like The Monster Squad and fuse it with my passion for the Bible. I am captivated by the struggles of the people of faith in the Bible, and how God used unremarkable people to accomplish feats of hope and inspiration. So, you know, I wanted to write that—only with tons of slimy, snarling, flesh-eating monsters.

3) What genre does your book fall under?

Christian Horror! It’s my goal to pit a group of Christian believers against a chthonic terror outside our perception of reality. It’s very Lovecraftian in the sense that it reveals how tiny we humans are in the cosmos, yet whereas Lovecraft’s characters despaired or fell to madness in the face of such truth, my characters have to stack that against their faith and worth in God. It’s a test of belief. Some will fail the test, some will pass. Therein lies the drama.


4) What actors would you choose to play the part of your characters in a movie rendition?

Since The Coming Evil Trilogy originally began as a screenplay back in the late 1990s, I’ve thought about this question a lot. Over the years, my answers have changed. For the main character of Dras (drAHz), I think of Shia LaBeouf now, while I used to envision a young Ethan Embry back in 1998. They’re both boyish and squirrely enough to pull it off. For Dras’ best friend/soul mate Rosalyn, I imagine an I Know What You Did Last Summer-era Jennifer Love Hewitt. For the dastardly Strange Man who seeks to tear Dras and Rosalyn apart, I’m torn between Johnny Depp and, surprisingly Tom Hiddleston who recently played Loki in Thor/The Avengers. I need someone who can pull off creepy, but alluring as well. And he’s gotta be able to grin like a sadistic devil.

5) What is the one-sentence synopsis of your book?

As the demonic Strange Man’s master edges closer to Earth, a small band of monster fighters will have to make their final stand for the soul of their town.

6) Will your book be self-published or represented by an agency?

The book will be released by Splashdown Darkwater.

7) How long did it take you to write the first draft of the manuscript?

At least a couple years of actual writing, but many more years before that of formulating in the back of my mind. The real kicker is the road to publication. I finished my first draft back in 2009, but then I went to work finding a publisher and getting the first two installments of the saga published!

8) What other books would you compare this story to within your genre?

Ah, books are tough. I’m a movie guy and, again, this started as a movie. I still think of it as a movie in book form. At its heart, Dark Hour is a war/invasion novel. I think of Battle Los Angeles or either major film adaptation of War of the Worlds in terms of intensity and scale and human drama with an alien invasion for a backdrop. Most recently, it’s a lot like the TV show Falling Skies. Very much about an outside force taking over and a ragtag resistance struggling to overcome their own bickering to do any good. And, of course, there are copious amounts of destruction.


9) Who or what inspired you to write this book?

Humanity. That’s a really broad and pretentious answer, but Dark Hour is all about the best and worst of humanity. We can be a sickening, hateful, arrogant bunch, but every once in awhile, one of us does something that is so outstanding and selfless and admirable that it captures the attention of the world. I think most people want to be “good people”, but we so easily lose our way. The road to hell, and all of that. Also, Hebrews 11 in the Bible has a big influence on me and this book. It’s often nicknamed “The Faith Chapter” and it gives a passionate overview of some of the most notables heroes of faith in the Bible—those who shut the mouths of lions and overthrew kingdoms and what not. But, what strikes me most is the latter part of that chapter that lists a plethora of unnamed saints who were brutally murdered in various horrible ways for their faith. They never saw the fruits of their efforts, but they died with their head held high and their sight on Heaven. The Bible said the world was not worthy of such as those. Those are my heroes—the nameless ones who gave everything for what they believed in. I hope that, when push comes to shove, I would have that kind of courage.

10) What else about the book might pique the reader's interest?

The first two parts of The Coming Evil Trilogy are available online and in stores everywhere. Look for The Strange Man and Enemies of the Cross and get all caught up before war breaks out when Dark Hour hits early 2013! Plus, readers might be intrigued to read my most recent novel release Rift Jump. It’s a teen-angst romance adventure story through the multiverse with parallel dimensions and the unknowable evil lurking in the dark spaces in between the worlds! Rift Jump is a cosmic take on my uber-mythos and gives some perspective on where all those nasty monsters in The Coming Evil Trilogy hail from. I also recently did an interview (with Ed, ironic enough) about the book. Check it out! 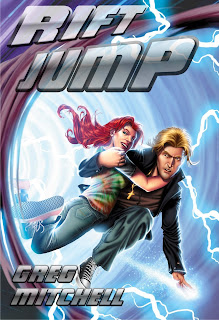 ***
Now it's my turn to tag more authors! Be sure to check out these blogs next Wednesday (the 28th) for their answers to these questions!﻿

Bob Freeman
Frank Creed
Posted by Greg Mitchell at 6:00 AM