Hey, folks. We're back again for our penultimate installment in the Rift Jump commentary. Before we get started, head over to Goodreads and enter for your chance to win one of two signed copies of Rift Jump! Go! Go now!

Now, onto the commentary. Spoilers below. Be ye warned.

I really liked how this section turned out. This differs quite a bit from the original draft written in the late '90s. It was always a super-hero concept, as I've been a comic book fan for as long as I remember. But, for the rewrite, I decided to add more of a horror element to it.

Ironically enough, the high school angle was downplayed in the original draft, but when I set out to rewrite this, I saw an incredible opportunity to take my angst-ridden teenagers and plop them in the middle of the typical angst-ridden high school setting. Having Sara take to "normality" like a fish to water was a fun turn. Michael's high school experience, here, is a lot like my own. Tuning out teachers and daydreaming while looking out the window, imagining I'm on some faraway adventure. Michael is an outcast and Sara makes friends during home period on her first day. They really couldn't be more different.

This also is the episode that shows a shift in power balance. Sara starts to crave the power that Michael has, while Michael's all emo-ing out in his room, crying because he thinks Sara is going to outgrow him. He's more vulnerable than we've ever seen him and we see how desperately attached he's become to Sara. Unhealthily so, I'd say. 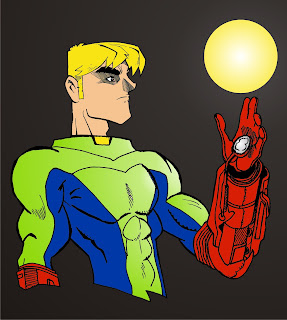 The biggest change in this published version is the addition of my old comic book character Light Sphere! You have no idea how excited I am to see Light Sphere get a chance in the spotlight. He was originally a character I created that had no connection to Rift Jump at all, but I looked at what I had here. Michael is in a super-hero world, I'm in the process of updating an old high school idea--hey, let's dust off another old high school super-hero and they can meet! Better yet, let's have the classic Marvel crossover where they first meet in the street, mistake each other for the enemy, beat the holy crap out of each other, and then team up to fight the bad guy!! :)

I was in ninth grade when I made Light Sphere. Obviously X-Men was the big thing back in the mid-90s with guys like Cable and Wolverine tearing up the comic book stands. I was too lazy to come up with a proper origin story for Light Sphere back then so he was your typical "mutant"--born with powers. But, I wanted to give him a handicap, so I devised this idea that he couldn't use his awesome powers without these souped-up gloves on his hands, otherwise he'd fry off his flesh. Gnarly, yes, but my 14-year-old self thought it was properly dramatic. I remember writing and tracing...er, drawing...a Light Sphere comic and taking it down to Centerfield, the comic and card shop downtown. I went to that place all the time and used to hang my drawings on their walls in exchange for free bags of sour gummy worms. I showed the proprietors--an older couple--my creation and the lady told me that my idea of giving Light Sphere his limitation was "very original". I beamed with pride, picked up some sugary treats, and set out to finish a second issue where Light Sphere joins the "Governmental Mutant Agency". Oh yeah. Well, me being me, when I wrote the modern version of Light Sphere, I kept all of his stuff the same--even right down to working for the government :p What can I say? I'm a stickler for continuity, no matter how lame it is.

Sadly, the comic store burned down not too long afterwards. I don't think Light Sphere had anything to do with it.

Speaking of super-heroes, this brings up the Superman connection. You know, I made Michael invincible when I was 15 because what 15-year-old boy doesn't want to be indestructible and all-powerful? However, I'm sad to say, that I never used that plot point very much. Even in the modern version--in the beginning--I'd have Michael get shot or punched or whatever, but that was it. Kind of a letdown, really. But, I'd start watching some animated Superman movies and I'd see all the incredible damage that Superman took. He'd get thrown through buildings, slapped with a tree, hurtled across continents. I thought, "Man, I'm not putting Michael through enough. He's invincible! Let's kick the crap out of him!" I really started upping the battle scenes in the book, rewriting them to make sure Michael got beat up as much as possible without distracting from the story.

When Keven, my editor, was reading through this, he asked if I was a Superman fan, because there were so many references to Superman. The Hooded Man tells Michael that Sara is his kryptonite, and he's pulling some Superman moves. Aside from being inspired to beat on Michael some more, I hadn't made the mental connection how Superman-esque Michael was. But when Keven said that, something clicked. I thought about how I saw Superman. He's this god-like being, above mortals. And he's got Lois Lane, a frail woman (by comparison to his strength, I mean). I really started applying that to Sara. She views Michael as Superman. He's a god to her, and his strength only exaggerates her weakness. How would that make her feel? Sara, who has felt weak for so long?

Wouldn't she resent that?


In light of Keven's Superman comparison, I made a couple more refernces to Supes to show that Michael was a fan of the character.

This section also is a major break-through for Michael. He's only been a hammer all this time, but he's finally starting to understand what being a hero is. I love how all the super-hero/Light Sphere stuff really dove-tailed into Michael's continuing transformation. And, what's more fun, is that it was almost entirely by accident. That's how I know when a story's working.

Since we're on the subject of Superman, my vote for best Superman is Christopher Reeve. My parents took me to see Superman III when it first came out (bad idea, as I was 5 and that robot chick at the end totally scared the poooo out of me). That scene where he battles his evil self in the junkyard, though, is always one of my favorites. Funny that, even today--even in Rift Jump--I'm still echoing that scene of fighting our inner man. Watching Christopher Reeve is still awe-inspiring to me. He makes me believe that a man can fly...

UPDATE: Jessica Thomas posted quite the positive review of the book over at her blog. A nice surprise to wake up to in the morning. Could I be "the Christian speculative world's Terry Pratchett"?! Go check it out, yo!