Now this is a great way to start off the new year. 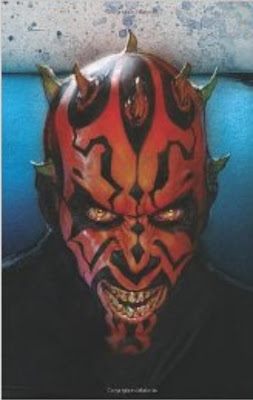 In stores now (finally) is Ryder Windham's latest Star Wars book--The Wrath of Darth Maul! Maul has long been one of my favorite characters in the series and this book takes you through his life: from the very beginning, through the events of The Phantom Menace where he met his supposed end, and beyond! With Darth Maul making a dramatic and most unexpected return to Star Wars later this year in The Clone Wars, this is a must-read for young fans of the cartoon who want to get the skinny on who this red-skinned devil is.

As excited as I am to see Darth Maul's story told in full, the reason behind this exuberant blog post resides on Page 174. You see, it is on this page that my very own contribution to the Star Wars saga--the Dusty Duck--gets a mention!! Why? Darth Maul plays an integral role in my Dusty Duck story, which you can read by accessing the Wayback Machine and clicking here.

Seeing "my creation" get a mention in a major Star Wars release is really fulfilling. Like any kid from the '80s, I grew up with Star Wars. When I was in high school, I first discovered the Expanded Universe (or EU for short).

It was two things that did it: I glimpsed a hardcover edition of the much-maligned The Crystal Star on the new releases display at Hastings, and then I found the first issue of Dark Horse Comics' Crimson Empire. Crystal Star enlightened me that the adventures of Luke, Leia, and Han extended past the movies (and they had kids!). Crimson Empire showed me that there was a whole galaxy of potential stories--that every minor background character could be the star of his, her, or its own epic space opera. I was spellbound--even more so when I discovered that all of these books, games, comics, cartoons, etc worked together into a single (mostly) cohesive continuity.

Ever since that moment, I was fascinated by this rich lore written over these decades by many talented storytellers. And, perhaps, most importantly--I wanted to write my own story. 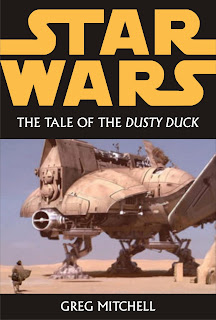 Many years later, in 2006, I got that chance, thanks to a limited running contest on the official site. The feature was called "What's the Story?" and gave fanboy writers like me the opportunity to take a minor background character, ship, or creature and develop a backstory that, if selected, would be officially adopted into Star Wars canon forevermore. I worked hard, wanting desperately to leave some small mark on this series that had captivated me. I know it sounds silly, but it was a rigorous time and taught me a lot about perseverance and rejection in the writing biz.

At last, after several rounds and multiple tries, the heavens parted and I won an entry of my very own: The Dusty Duck. My tale of a doomed spacecraft and the star-crossed lovers who flew it was an entry I, initially, hadn't thought long and hard about. It was just one of many submissions, but, looking at it again, I realized how proud I was of the concept. My excitement was renewed when, a couple years later, it received a place in The Complete Star Wars Encyclopedia. After that, I feared my little ship that could would settle in the dusts of obscurity, never to be mentioned again.

But today, that's changed thanks to author Ryder Windham and The Wrath of Darth Maul. Folks, the Duck is in there. Yes, it's only a passing mention--not enough to warrant such a long and gushing blog post, but it's there. My contribution to the Star Wars saga lives on in other writers and there are few things, creatively speaking, that are cooler than that.

I am forever grateful to you, Mr. Windham, for resurrecting my baby :) My hope is that it'll help inspire some other kid to take notice that the stories of Star Wars extend further and deeper than what they've seen in the movies. Maybe one day, they'll make their own contribution to that galaxy far, far away.

Finally here's the deleted scene that started it all, featuring the Dusty Duck....

Posted by Greg Mitchell at 5:00 PM

That is beyond awesome, Greg! Congrats!

Congrats! so your story is canonized? It must be, or it wouldn't have been mentioned at all!

I didn't even know about Maul's return. So THAT's why I've been seeing so much Phantom menace stuff around lately.

Canon, indeed! I'm very proud...which I suppose is why I post long blogs like this about it *sheepish grin*.

Yes, Maul is returning. I think his episodes are supposed to be the two-part finale of The Clone Wars animated series. I'm really looking forward to seeing what they do with him.

I never heard of the Dusty Duck until I saw someone post about it just now. This was the first link that came up when I went to search for it. It's been several years now, but congrats on your entry in the encyclopedia!

Thank you very much, Jay! It's something that still gives me a thrill :)