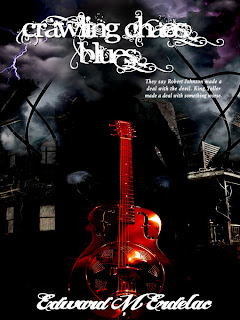 Where the heck’s the ever-lovin’ Greg Mitchell though, you might ask, having come to his site...well, he’s over at my blog, talking about what I suspect is his favorite subject. No, not himself…well, partly. Monsters, Halloween, that sorta stuff.

I write the Merkabah Rider series from Damnation Books, among other things. It’s a weird western about a Hasidic gunslinger tracking down the renegade teacher who betrayed his mystic Jewish order of astral travelers across the 1880’s Southwest territories. There are two books in the series, Tales of a High Planes Drifter and The Mensch With No Name. But if you wanna hear about all that and about me, Greg’s got an interview with me right here on his site somewheres. Basically I write spooky stories, and I know Greg from our Star Wars writing.

Blues music got its start in the Mississippi Delta (some will say New Orleans, but that’s inarguably the seat of Jazz, if you ask me) by way of Chicago, but its roots reach back into antiquity, back through the chants of slaves on work gangs across the Middle Passage to the calls of native Africans to their gods.

The soul of the blues is a dark one. There’s a famous and oft-repeated story about one of the kings of the Delta blues, Robert Johnson. 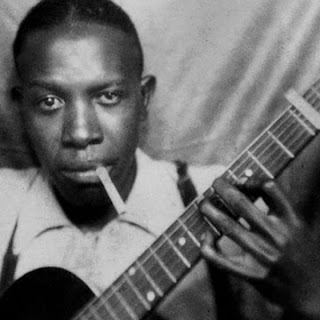 It’s said that he went to a country crossroads at midnight and shed some blood, calling up the Devil himself to come and teach him to pick his guitar and sing. Johnson himself sings about it in the Crossroad Blues, the same song Eric Clapton re-did, and the movie Crossroads with Ralph Macchio revolves around that legend too.

So does my story, The Crawlin’ Chaos Blues. Except in mine, it isn’t the Devil who comes to answer the crossroad sacrifice.

If you’ve ever read any HP Lovecraft, you know the monsters in his tales, the extraplanar entities who frequent his dark universe are worse than evil. At their best, they’re entirely apathetic to humans. At their worst, they’re totally malicious and insane. And the worst of the latter bunch is Nyarlathotep, the Dark Man.

He traipses through horror fiction under a bunch of different names. Stephen King acknowledges that the Walkin Dude Randall Flagg is Nyarlathotep. He appears in the forthcoming third book of my own Merkabah Rider series too.

In my short story The Crawlin’ Chaos Blues, when two would-be blues musicians, King Yeller and Harp Elkins are set upon by a pair of white supremacists in the midnight crossroads and turn the tables on them, it’s the Dark Man who rises out of the road when their blood seeps into the ground.

Now in the story of Robert Johnson, the Devil gets his due. After coming to the cusp of making it big, Johnson was poisoned in a bar and died.

In my story, King Yeller quickly becomes renowned for his playing and singing, drawing in the crowds from all over the south. But the success comes with a price, an awful twist to amuse the Dark Man. King Yeller has quickly accumulated a catalog of popular songs, but the Dark Man has taught him one special song that puts all the rest to shame. The problem is, if he plays it, he is guaranteed to lose all he has gained.

And this gnaws at King Yeller. Every song he plays pales in comparison to the one the Dark Man taught him. The Crawlin’ Chaos Blues.

Then one night, he decides to play it anyway.

And what happens next, that’s the story.

It all stems from my love of the blues and Lovecraft. I like to drop little easter eggs into my work as well, and since this story takes place in the 1960's, I had to write in a cameo early on for my favorite blues musician of all time. 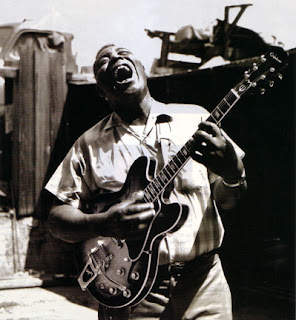 Now you know with a name like that he’s gotta be good right? The man is so cool he even appeared as himself in a Marvel comic playing his song Wang Dang Doodle in a band WITH ALIENS. IN SPACE!! 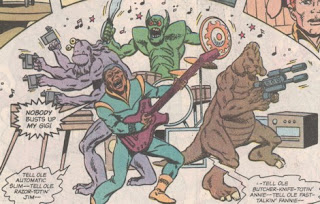 He earned the moniker from his distinctive singing style. He’s got a voice low and throaty like a bullfrog’s, but he lets out these long, wailing notes in some songs, particularly in one of my favorites, Smokestack Lightnin’ about a poor boy watching a train go by in the night and wishing he was on it.

When the man who discovered him, Sam Phillips, heard him sing, he said; “This is for me. This is where the soul of man never dies.”

I adore the Wolf. What’s most interesting about him to me is his dichotomy. A lot of the blues musicians of his era lived up to the Robert Johnson legend. They lived fast and loose, played it hard and not too smart. But Chester was different. He was a complete wild man on stage, going on all fours and kicking up his heels, licking his chops and rolling his eyes like a man possessed. And at six foot six, black as midnight and three hundred pounds, that was a sight to see.

But as soon as he stepped off stage, he put on his horn rimmed glasses and drove his modest car home to a quiet life with his wife, who managed his finances and to whom he was faithful. He didn’t drink to excess or do drugs, and he took his fellow musicians to task for spending their money stupidly on flashy cars and clothes and worse things.

The tragedy of H Hn’ Wolf is that he left his home in Mississippi at the age of thirteen. In the sixties, at the height of his success, he returned to the south and put out the word in his hometown that he wanted to see his mother.

He waited in a barber shop for an hour or so and finally one of the locals produced her. He rose to his full height to embrace her. He’d brought wads of cash to put in her hands.

“Lookit all the money I made, momma. It’s for you.”

But his mother stiffened and backed away from him. She wouldn’t take a bit of it, and rebuked her son for playing the Devil’s music. She turned, and left him standing in the barber shop.

His bandmates said he wept uncontrollably the entire rainy ride back up to Chicago.

Take some pity on the Wolf. Go to youtube and listen to some music. I’d recommend Killin’ Floor and I Ain’t Superstitious. Perfect Halloween listening.

Also click over here to read an excerpt from The Crawlin' Chaos Blues!

Hey you guys have been great. Thanks for reading. We now return you to your regularly scheduled Greg Mitchell awesomeness.

"...he’s over at my blog, talking about what I suspect is his favorite subject. No, not himself...well, partly."

HA HA HA. I did a spit take when I read that! You know me too well :p

Thanks for such a great blog post, Ed. Insightful as always and a lot of fun.

Everybody, you should really check out Ed's stuff. I do believe he's going to be running a giveaway for Crawlin' Chaos Blues right here, so stay tuned!

'And at six foot six, black as midnight and three hundred pounds, that was a sight to see...'

Wow! That WOULD have been an impressive sight.

"Hey thanks, Greg! It's always a pleasure to visit, even through the ether.

I'm indeed running a giveaway. I'll send a .pdf copy of my story The Crawlin' Chaos Blue to the first three interested parties to comment (and DRC, if you're interested, I'll send you one too since I posted this after you commented).

I would love a copy. That would be great, thank you. Do you need me to do anything?

Hey, DRC, I got a copy for you right here! Shoot me your e-mail and it's yours :)

Hey Greg! My email is:

Look forward to receiving it. Thank you!