Major Announcement: "Enemies of the Cross" Cover and Details!

I thought we'd kick off the weekend by premiering the brand new cover for The Coming Evil, Book Two: Enemies of the Cross! Not only that, but read below for your first peek at what's in store in this second chapter of The Coming Evil Trilogy.

If you've not read Book One--The Strange Man--be prepared for some spoilers! 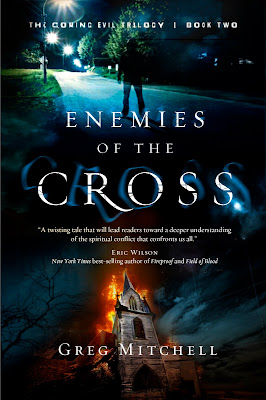 Everyone must choose a side...

Following the aftermath of Dras Weldon's ill-fated stand against the Strange Man, Dras's older brother, Jeff, discovers that the demon's arrival in Greensboro did not come as a surprise to everyone. Consumed by guilt for abandoning his brother when he needed him most, Jeff embarks on a crusade to expose Greensboro's dark secrets. As Jeff works to unravel the treachery that exists among the people he once trusted, his thirst for vengeance leads him down a dangerous path as his moral lines begin to blur.

Jeff's frenzied obsession pushes his wife, Isabella, further and further away, and his congregation begins to lose faith in him as well. Still Jeff drives himself to gather all the pieces of the Strange Man's puzzle.

All the while, the Strange Man grows closer to claiming Rosalyn for his own evil designs, and the streets of Greensboro turn ominous. A dark hour is coming to this small town, and the battle lines are being drawn, setting the stage for an incredible final confrontation between those who hold to the light and those who lose themselves in darkness.

The second installment in Greg Mitchell's The Coming Evil Trilogy, "Enemies of the Cross" pulls the reader deeper into the Strange Man's assault on Greensboro and serves as a reminder that the greatest evils often lie in the hearts of mankind.

The book is available for pre-order now on Amazon and hits stores everywhere February 2012!

Posted by Greg Mitchell at 5:05 PM

Totally stoked for this!!

something to look forward to,
and it sounds like a book to read only in the day time! :)

got 3 more hooked on your book!

Hey, jel, thanks for that!

Definitely a day-time book for you :)