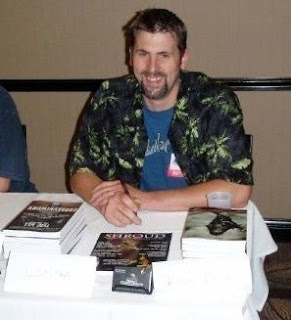 If you’ve not read Part One of my in-depth interview with Kevin Lucia, hop to it!

We’ve been talking about Kevin’s new book Hiram Grange and the Chosen One—the tale of a drug-addled monster hunter/occult detective battling demons—both personal and Lovecraftian!! Here’s Part Two of our interview with Kevin. Once again, amazing art is provided by Malcolm McClinton!

Greg Mitchell: Okay, Hiram Grange is a collaborative effort. What’s next for you on the solo horizon? I hear that your first novel has just been picked up by Shroud Publishing. Congratulations, by the way. Are you ready to talk about that novel yet or are you going to be all “writer-y” and dodge it with vague and mysterious generalizations?

Kevin Lucia: It'll be the first novel in my “mythos”, but a standalone. A “ghost story” of sorts. I was initially headed in a very Lovecraftian direction, but now I've toned it down so that readers most likely will only feel a “Hmm. I know I've heard that somewhere before” vibe and that's all.

I'm gonna give you the inspiration for it – be all vague and mysterious – but really, it's the core of the novel without telling you too much. It's the first two lines of a nonsense limerick which, when taken alone, has always sounded very ominous to me:

One bright day in the middle of the night,
two dead boys got up to fight.

So there's two dead, boys, see? And their conflict extends past the grave. One wants vengeance. The other justice. And all these other people get caught up in the middle...but they're not “innocent bystanders”. Not at all.

This is presumptuous: but think of it as a wild “Stephen King/Dean Koontz/Peter Straub” mix that hopefully moves at the pace of a “Repairman Jack” novel, and that's what I've got.

GM: All cool! What’s next for Hiram Grange? Are we looking at a “Season Two”? Will you still be involved? Don’t hold out on us, man.

KL: There definitely will be a Season Two. Scott Christian Carr, author of Hiram Grange & The Twelve Little Hitlers, is currently writing the first title in Season Two, Hiram Grange in Al Queda's Caves. As to what form the Second Season will take, we're not sure yet. Depends on how much attention the first “Season” draws.

In my own opinion – completely unsanctioned by Tim Deal, by the way – I think it'd be best if Hiram followed a very Harry Dresden/Repairman Jack model. Two or three standalone adventures separating “arc-heavy” adventures. Easier for new readers to jump aboard, that way.

GM: True. I know yours was largely standalone with some connective tissue to the other books, but I always like to see big arcs in my series.

KL: Also, there's a Hiram Grange anthology in the works. And right now, every Shroud Digital Edition – free download at the moment – also features Hiram Short Shorts. Most recent was Little Edsel Einstein, A Hiram Grange Story – also by Scott Christian Carr – which follows up on a supporting character from his Twelve Little Hitlers. He's got another Hiram short coming up titled “The Jesus Bomb”. 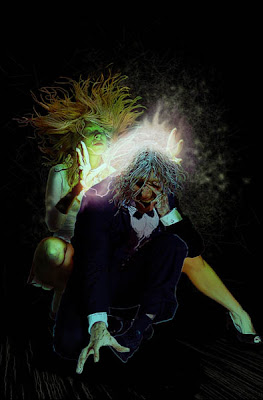 As for me, I'll always return to Hiram. Two ideas fascinate me right now: one, anything having to do with what happened to Hiram's father; two: a time-travel adventure that would somehow team up Hiram Grange and Sherlock Holmes. We'll see what the future holds.

GM: It strikes me that Hiram Grange is like the new Kolchak, only even more rumpled and self-loathing :p Alright, now, it’s fairly obvious that you’re a “horror guy”, but people might be surprised to learn that you’ve written your fair share of “inspirational” stories based on your own life. Was that a conscious decision—to be a writer not bound by genre—or did you just stumble into that?

KL: I've always wanted to be just a “writer”. My first “novel” - written in a Mead spiral notebook my senior year in high school – was a teenage basketball romance/drama that had nothing to do with my life then whatsoever (wink). My second was the first act to an epic space opera (both sit in a box on my back porch, by the way). So “writing” has always been a generic pursuit for me.

When I first started out, I remember a fellow newbie cautioning me about “writing all over the map” - that I needed to establish a “brand” so I wouldn't confuse potential buyers/fans.

I thought this kind of silly. See, I continue to entertain the foolish and arrogant notion that I can write whatever I want. After this novel is completed, I'll turn to a very different, more heroic, “journey of the hero” contemporary fantasy (already ten chapters in). After that is another very heroic, almost “comic book superhero” suspense/thriller. Somewhere in there, I've got a terse, hard-hitting crime/noir story, I'm sure.

The inspirational thing happened by accident (or maybe not?). I'd just sold my first story - “The Way Station” - to the first edition of The Midnight Diner when I came across a submissions call for a nonfiction story about how my faith had helped me make a crucial life decision.

I decided to give it a shot. The word count was low, the pay decent, and at that point I'd been wrestling with how I wanted to express my faith in writing. I thought to myself: “This would be nice; to just write fiction as FICTION that's only very subtly influenced by my faith, then on the side write honest essays – not about doctrine or theology – but about how faith has impact my family's life. The editor for that collection bought the story, then continued to solicit me for more.

SO here I am, six creative non-fiction stories later: one sold to Tyndale, two to Bethany House and three to Guideposts. They're short, they pay well...but most importantly, they keep me BALANCED. Focused on what's really important.

Of course, there's been a curious drawback. My in-laws and father care nothing for horror and will only read my nonfiction. SO, if I were to win the Stoker Award or something, their most likely response would be: “Yeah, that's nice and all, but when are you writing another NICE story?”

GM: Sigh…I know the feeling. I’ve gotta be honest, I think you are one of the hardest working “up-and-comers” I’ve seen in the writing world. You’re always at workshops and conventions and learning and, like I said, I see your name everywhere attached to a number of anthologies. Plus, I see in you a real desire and effort to balance that and be a family man. I really admire that about you. I don’t think you’d work that hard without some sort of end goal. What do you want most out of this life as an author?

KL: Of course like all pie-in-the-sky newbie writers I once harbored dreams of writing for a living. Four years in, and those dreams haven't been dashed, just spritzed with a heavy dose of realism. It can happen. Still does. But from what I've seen, there's a heavy price to pay for writing full time, and I'm still not sure if that's where I want to go. Might be a moot point: maybe I'm not good enough to be a full-time writer.

I was influenced most by meeting folks like Mort Castle, Gary Braunbeck, F. Paul Wilson and Tom Monteleone. These people have RESPECT, man. Not fame. Respect. Almost reverence. Respect professionally in the business, artistically as writers, and as great human beings. I'll always look to improve my writing, push it to new levels. But fame may not be what I want. Professional and artistic respect – yeah. That sounds mighty fine to me.

Also, I want to be driven primarily by my creative impulses. On one hand – I'm pretty pragmatic. If Del Ray called tomorrow and said, “Hey – we'd like you to write a Star Wars novel,” or HarperCollins called and asked, “Interested in writing Gulliver Travels to Zombieland? I'd say “Sign me up!”

But, I want to pursue things that intrigue me on a creative level. I just finished up editing Shroud's Halloween Issue, and it was a blast, and I can think of two other special issues I'd like to edit someday. Last summer I wrapped up a VERY different anthology with Shroud – The Terror of Miskatonic Falls – that's basically going to be – check it – a Lovecraftian poetry and prose graphic novel-esque collection. I pursued both not to further my career, but because they intrigued me on a creative level.

GM: Well, I’m sure I’ll continue to see “Kevin Lucia” wherever I look, so I’d better start getting used to it :p Thanks for taking the time to hang out! I’d say this has been a pretty probing interview, so let’s end it with an easy one: Better Dracula: Bela Lugosi or Christopher Lee?

GM: That, sir, is where we must part company. No one will be better than Lee. No one.

Thanks for having me, Greg! It was fun!

Man, it's so cool that you're introducing all these great authors on here! Another fine interview, my friend!